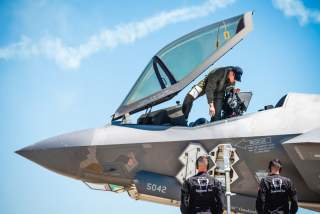 U.S. Marine Corps F-35Bs in September 2018 conducted an air strike in support of what the U.S. Navy described as "ground clearance operations" in Afghanistan.

At least six F-35s from the 388th and 419th Fighter Wings on April 12, 2019 traveled from their home station at Hill Air Force Base in Utah to Al Dhafra airbase in the United Arab Emirates to participate in coalition air operations targeting Islamic State militants in the Middle East.

"We are adding a cutting-edge weapons system to our arsenal that significantly enhances the capability of the coalition," said Lt. Gen. Joseph Guastella, commander of U.S. Air Forces Central Command. "The sensor fusion and survivability this aircraft provides to the joint force will enhance security and stability across the theater and deter aggressors."

Air Force F-35As in April 2017 deployed to Royal Air Force base Lakenheath. USAF F-35As that fall also deployed to the U.S. Indo-Pacific Command area of responsibility. The Middle East deployment is the USAF stealth fighter's first to a war zone.

The F-35s could fill the gap that the Air Force's F-22 Raptors left when in February 2019 they departed the Middle East after five years of continuous operations. Older, non-stealthy F-15C fighters stood in for the radar-evading F-22s as the Pentagon's main air-superiority fighters in the region.

The Air Force once touted the Raptors as a "quarterback" for strike operations in a complex area that includes anti-aircraft threats from the Syrian military, as well as Russian aircraft operating in the region.

Not coincidentally, Air Force leaders have begun describing the F-35 in similar terms. "The F-35A provides our nation air dominance in any threat," said Gen. David Goldfein, chief of staff of the Air Force. "When it comes to having a ‘quarterback’ for the coalition joint force, the inter-operable F-35A is clearly the aircraft for the leadership role."

In fact, the Air Force had little choice but to pull the radar-evading Raptors from the Middle East. The flying branch is struggling to rebuild the tiny and stressed F-22 force following the destruction of Tyndall Air Force Base, once the home of scores of Raptors, in Hurricane Michael in October 2018.

With the April 2019 deployment, the U.S. Air Force becomes the third service after the Israeli air force and the U.S. Marine Corps to deploy the F-35 in combat. The U.K. Royal Air Force soon could become the fourth to send F-35s to a war zone.

Tel Aviv in May 2018 announced it deployed the radar-evading jet on two fronts. The Israeli government circulated a photo of an Israeli F-35A flying over Beirut in Lebanon during the daytime, strongly implying the fighter struck targets in Lebanon. Israeli warplanes also frequently operate over Syria.

U.S. Marine Corps F-35Bs in September 2018 conducted an air strike in support of what the U.S. Navy described as "ground clearance operations" in Afghanistan.

The Royal Air Force in April 2019 announced its own plan to deploy F-35Bs to the Middle East some time in 2019. "Britain’s new cutting-edge F-35B aircraft will depart their home station of RAF Marham in Norfolk later this year for Cyprus in their first overseas deployment," the U.K. government stated.

RAF warplanes fly from two bases for missions targeting Islamic State militants in the Middle East. In the east, RAF fighters and support planes operate from RAF Akrotiri in Cyprus. In the west, another RAF expeditionary group flies from Al Udeid air base in Qatar.

Deploying to Cyprus makes it likely the RAF F-35s will fly combat sorties. The RAF in April 2019 operates 17 vertical-landing F-35Bs. In all, the U.K. air arm plans to acquire 138 F-35s from Lockheed Martin and operate them over the long term alongside a similar number of Eurofighter Typhoons.

Besides flying from land bases, RAF F-35Bs starting in late 2019 also will operate from the Royal Navy's two Queen Elizabeth-class aircraft carriers. While the RAF owns the F-35s, air force and navy crews together fly the planes as part of the U.K. Lightning Force.

The U.S. Navy is still working up its own F-35C squadrons for their first front-line cruise aboard an aircraft carrier, currently scheduled for 2021.