The F-35 Stealth Fighter: The Safest Fighter Jet Ever Made? 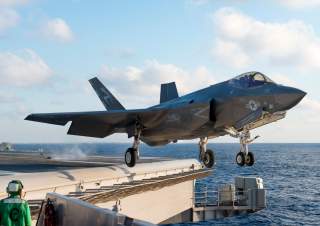 Key point: New, advanced and networked system and sensors will keep the F-35 safe from collisions and other threats.

The Air Force will soon operate F-35s with fast-evolving collision-avoidance technology able to help fighter jets avoid ground collisions by using computer automation to redirect an aircraft in the event that a pilot is injured or incapacitated.

Later this year, the Air Force will fly an F-35 equipped with an existing technology now in F-16s called Air-Ground Collision Avoidance System, or AGCAS.

The system is slated to be fully operational on an F-35A as early as summer, 2019, service officials said.

Preliminary AGCAS development work has been conducted as part of ongoing F-35 development.

There can of course be a range of reasons why an aircraft might collide with the ground, one of which could simply be that a pilot winds up pulling so many "G's" that they lose consciousness, a senior Air Force weapons developer said.

The technology calculates where the aircraft is and where it would hit the ground based upon the way it is flying at the time, service officials said. If the fighter jet is flying toward a potential collision with the ground, the on-board computer system will override the flight path and pull the aircraft away from the ground.

Most of the algorithms, developed by Lockheed Martin, are continuously being refined and testing using simulation technologies.

Interestingly, results from a case study featuring test-pilot input on AGCAS details some of the ways pilots can learn to work with and “trust” the system’s computer automation. This question of how pilots would rely upon the system emerged as a substantial concern, according to the research, because the system takes control away from the pilot.

“Understanding pilot trust of Auto-GCAS is critical to its operational performance because pilots have the option to turn the system on or off during operations,” writes an essay about the case study called “Trust-Based Analysis of an Air Force Collision Avoidance System” in “Ergonomics in Design: The Quarterly of Human Factors Applications.”

The essay further explains that results from their study found that AGCAS was deemed far superior by test pilots to previous “warning systems” which are “prone to false alarms” and can “degrade trust.”

“Warning systems require the user to manually respond and thus are not effective when the pilot is incapacitated or spatially disoriented, and the pilot may not always correctly recognize a warning or correctly make the terrain collision evasion maneuver,” the essay writes.

In a concurrent but longer-term effort, the Air Force is now also working to develop algorithms to stop air-to-air collisions. This technology, developers explain, is much more difficult than thwarting air-to-ground collisions because is involves two fast-moving aircraft, rather one aircraft and the ground.

Envision a scenario where two or more supersonic fighter jets are conducting combat maneuvers in such close proximity, that they come less than 500-feet away from one another -- when an automatic computer system engineered into the aircraft takes over and re-directs the fighters, saving lives and averting a catastrophic collision.

This is precisely the scenario scientists at the Air Force Research Lab are hoping to make possible by the early 2020s through an ongoing effort to deploy Air Automatic Collision Avoidance System, or ACAS.

Algorithms are being specifically developed to automatically give computers flight control of an F-16, once it flies to within 500-feet or less than another aircraft, Air Force Research Laboratory developers have told Warrior Maven. The computer systems are integrated with data links, sensors and other communications technologies to divert soon-to-crash aircraft.

There have been several successful tests of the ACAS technology at Edwards Air Force Base, Calif., using F-16s.

So far, the Air Force has conducted 19 "two-ship" flights and one "three ship" flights using the system to prevent collisions, officials said.

The system is also engineered to identify and divert aircraft that are "non-cooperative," meaning not from the US Air Force, AFRL developers said; sensors are designed to work quickly to detect a flight path or approaching trajectory with the hope of thwarting a possible collision.

While this effort has been underway for quite some time, an Air National Guard mid-air collision of two F-16s in South Carolina last year underscores the service's interest in rapidly expanding promising collision avoidance technology to incorporate air-to-air crashes as well as air-to-ground incidents. Fortunately, in this instance both pilots ejected safely without injury, multiple reports and service statements said.

This first appeared in Warrior Maven here in 2018.