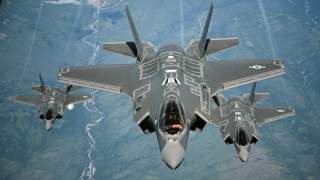 At least that's what Dan Grazier claimed, citing 2018 data from the U.S. Defense Department's Director of Operational Test and Evaluation. Grazier, a former Marine Corps officer, is an analyst with the Washington, D.C. Project on Government Oversight.

"The information that is provided by DOT&E shows that the F-35 is still in trouble in these vital areas," Grazier wrote.

Little or no improvement in the key availability, reliability and flying-hour metrics over the last several years means too few F-35s will likely be ready for combat when they are most needed, now or for the foreseeable future.

During durability testing, the Marine and Navy F-35s have suffered so many cracks and received so many repairs and modifications that the test planes can’t complete their 8,000-hour life-expectancy tests. The Marine version’s airframe life could be so short that today’s F-35Bs might end up in the boneyard as early as 2026, 44 years before the program’s planned 2070 sunset.

Despite years of patches and upgrades, the F-35’s most combat-crucial computer systems continue to malfunction, including the Autonomic Logistics Information System maintenance and parts ordering network; and the data links that display, combine and exchange target and threat information among fighters and intelligence sources.

The program has not provided the resources necessary to build, test and validate the onboard mission-data files that control mission accomplishment and survival.

As in previous years, cybersecurity testing shows that many previously confirmed F-35 vulnerabilities have not been fixed, meaning that enemy hackers could potentially shut down the ALIS network, steal secret data from the network and onboard computers and perhaps prevent the F-35 from flying or from accomplishing its missions.

The all-important and much-delayed F-35 Initial Operational Test and Evaluation report—assessing whether the plane is combat-suitable and ready for full-scale production—may well not only be late (perhaps well into 2020), but may also be based on testing that is considerably less combat-realistic than planned.

This is both because test personnel are forced to make do with incompletely developed, deficiency-laden planes, and the F-35 program has for years failed to fund adequate test-range hardware and realistic multi-aircraft, multi-threat simulation facilities.

The F-35 joint program office all but dismissed the government report. “All of the issues mentioned are well known to the JPO, the U.S. services, our international partners and allies and our industry team and are being aggressively addressed,” the office stated.

“The F-35 enterprise achieved numerous critical milestones during 2018 which have set a solid foundation for the program to complete Initial Operational Test and Evaluation and move into full rate production as planned in late 2019.”

But Grazier isn't alone in pointing out lingering problems with the F-35 program, which aims to replace most of the U.S. military's roughly 3,000 fighters and attack planes with as many as 2,300 F-35s at a long-term cost of around $1 trillion.

The U.S. Air Force in its 2020 budget request is proposing to buy the first up 144 upgraded F-15EX fighters from Boeing, potentially ending a nearly two-decade streak of only buying fighters that are stealthy and made by Lockheed.

While the F-15 lacks radar-evading features, it is cheaper to operate than an F-35 is and can carry hypersonic weapons that are too big for an F-35 to handle and which require a fighter to reach speeds that are outside of an F-35's performance envelope.