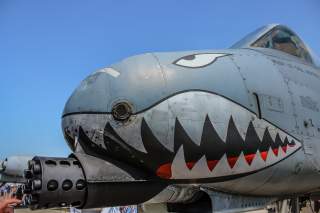 The day-two schedule—July 9, at China Lake—calls for four F-35Bs to conduct a mission covering two Ospreys extracting a pilot downed in enemy territory for one hour, then four A-10s covering a similar extraction. A similar set of missions under night conditions is scheduled for the late evening of day three.

On the afternoon of day three, A-10 and F-35 pairs are to spend an hour and a quarter on the China Lake target range attacking static, visible targets similar to the Yuma targets—but these are even less realistic, as they are just simulated attacks, with no weapons released.

The stated reason for moving to China Lake, despite the restrictions on actually firing weapons, is to test the A-10 and F-35 against the range’s “elevated” anti-aircraft defenses, which include simulated medium-range surface-to-air missiles, as well as shoulder-fired short-range missiles and light anti-aircraft guns.

On the afternoon of the final day, a pair of A-10s and a pair of F-35s will undergo tests to gauge their ability as airborne forward air controllers, directing the strikes of at least three sections of F/A-18Cs, which will simulate the bombing of more uncamouflaged targets, against the same medium- and short-range air defenses. In the late evening, a pair of F-35s and a pair of A-10s will conduct night close air support against the same targets and defenses.

These tests at China Lake show many of the same efforts to skew the events in the F-35’s favor as those at Yuma, but heavily amplified by the addition of the medium air defenses, for three main reasons:

1. Without instrumented test aircraft, the aircraft radar tracking at China Lake does not yield aircraft trajectories precise enough to accurately simulate a medium-range missile’s success or failure against the evasive maneuvers and countermeasures of an attacking A-10 or F-35. As in the first day of tests, this invites speculation supporting the favored outcome.

2. The medium-range missile defenses in this test do not incorporate the currently deployed Russian and Chinese stealth-defeating long-wavelength search radars now being used to cue their shorter-wavelength medium-missile radars. That means the F-35’s stealth will be much more effective against China Lake’s simulated medium missiles than against real-world missiles, thus severely skewing the test’s survival assessments in favor of the F-35 over the A-10.

3. The relevance of medium-range missile defenses to close-support scenarios is at best questionable, as previously discussed. Their significant logistical requirements and lengthy set-up times make them an impediment to maneuvering units heavily engaged in combat and trying to move quickly. Medium-range missiles are far more suitable for protecting rear-area interdiction targets or the static targets seen in trench warfare. Attacking either of these target systems with close-support planes would be a waste of lives and resources

The true challenge in performing close air support and battlefield air interdiction missions starts with locating targets. In real combat, these targets will be crewed by real people with a powerful wish to survive the war. They will be unlikely to simply park their vehicles or themselves in the open desert calmly waiting to be hit by bombs.

Instead, they will work hard to either camouflage their positions, dig in, or hide their vehicles beneath trees, barns or other cover to make it much more difficult for aircraft to find, identify and track them. Even when troops on the ground locate targets for the close air support planes, the rules of engagement almost always require pilots to get “eyes-on” before they can drop a weapon, to avoid civilian casualties and the disastrous effects on morale of friendly fire.

Nor is just locating, transmitting, and verifying a valid set of coordinates the end of the close-support problem. Targets react, move, hide, and fire back their own urgent threats, all in a matter of seconds. Pilots must be in close enough contact with the troops they’re supporting to cancel or switch targets in the middle of a firing pass.

Rather than telling us whether or not the F-35 can actually provide the kind of close support our ground forces need to survive and prevail, this grossly inadequate test has been designed to mislead.

This brings up the most significant failing in these tests: The designers essentially created a laboratory demonstration to show how aircraft can hit non-moving targets in a sterile environment. This hardly represents the conditions when soldiers and Marines are locked in close combat with an enemy just yards away.

In the worst-case, most urgent close-support scenario—the one in which these aircraft need to be tested—a small group of American soldiers are about to be overrun by a numerically superior enemy force with reinforcements too far away to help. Their only hope of survival is for an aircraft to appear overhead, raining deadly fire on the enemy soldiers, forcing them to take cover or retreat. Not one event during these four days of tests comes close to addressing or simulating this.

Equally important, that lifesaving support needs to show up, rain or shine. The fighting on the ground doesn’t stop because of a little rain. On the contrary, our enemies, in wars past and present, often choose to attack in bad weather just to offset American air-power advantages. There is no reason to believe they will not do so in future wars.

Because of our desert wars, we’ve forgotten that low-hanging clouds and poor visibility are the conditions at least one day out of three in most parts of the globe that aren’t deserts, where we might have to face far bigger fights than we face today. It is a travesty to pretend that a simulated cloud layer at 10,000 feet in clear desert air in any way tests what our troops need from bad-weather support.

Air Force leaders are fond of saying the F-35’s stealth characteristics will allow it to perform close air support in situations with heavy air defenses in a way the A-10 cannot. They like to paint a picture of a close-support aircraft having to drop a bomb on a target surrounded by enemy surface-to-air missiles but strangely devoid of friendly soldiers. Such a scenario is manifestly not close air support—simply because close means close to our troops.

Unlike the way this quickie test is being staged, close air support, particularly in the kind of high-intensity combat against the peer enemy Air Force leaders are so fond of describing, always involves significant friendly ground forces engaged in a combined-arms campaign. These tests won’t help determine whether or not the F-35 can hit moving targets that are actively trying to evade attack while also being accurate enough to avoid hitting friendly ground forces.

The very nature of combined-arms warfare means all arms mutually support one another so that the strength of one weapon makes up for the weakness of another. For example, an Army brigade combat team urgently needing close support will be employing artillery, mortars, rockets, and electronic countermeasure to suppress enemy air defenses in order to protect the aircraft providing them support.

Additionally, if ground forces are doing their job correctly, they’ll be disrupting the enemy’s air-defense forces so much that their missile crews will be concentrating on evading attack rather than firing at our airplanes. It is difficult to aim any weapon properly when being shot at by a tank’s main gun. These ground-brigade measures to suppress air defenses, in turn, greatly increase the effectiveness of the close support that the brigade combat team needs.

Rather than telling us whether or not the F-35 can actually provide the kind of close support our ground forces need to survive and prevail, this grossly inadequate test has been designed to mislead. Air Force leaders, in lockstep with senior civilian appointees, will undoubtedly march up to Capitol Hill with results in hand, saying that they conducted the tests with great care and the F-35 performed brilliantly, thus justifying bigger buys and getting rid of the A-10 sooner.

Our troops deserve better than a surreptitious test rigged in favor of a weapon that can’t do the job and against the one that can.