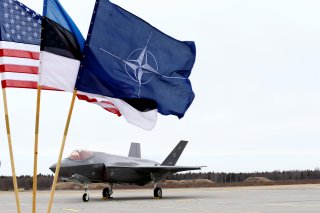 The U.S. Air Force has started stationing F-35A Lightning II fighter jets on the European continent, allowing the United States to bolster collective deterrence and streamline operations with the growing number of allied nations that have their own F-35s.

With F-35s in Europe, the U.S. Air Force will be capable of implementing tactics that have previously only been possible in the United States. European F-35 partners such as the Netherlands, Italy, and the United Kingdom will be positioned to leverage and build upon the United States’ advancements in multi-domain networking.

“It will build the muscle memory we need in theater to respond quickly,” U.S. Air Force Gen. Jeffrey Harrigian told The Mitchell Institute for Aerospace Studies.

“We addressed some of the challenges with the weapons systems, because we have gone from the nuances of a new weapons system to operationalizing it. We shared tips on how to optimize the F-35 for the whole joint force,” Harrigian explained.

The dialogue at the F-35 user’s group centered on operational guidance, maintenance techniques, and logistics and security procedures. Notably, Harrigian spoke at length about the value of a greater number of interconnected F-35s. With interconnected fighter jets, each nation can rapidly share information in ways that were previously impossible. Targeting operations and direct combat engagements can be carried out much more efficiently across vast, otherwise disconnected areas when a group of F-35s is able to share information effectively. In addition, a multinational F-35 force brings significant strategic advantages by greatly strengthening the capabilities of existing military alliances and enhancing the credibility of NATO’s deterrent.

“An unrealized true key strategic benefit of the F-35 is the partnership which accrues from a variety of different allied and partner nations all operating the same state of the art 5th-Gen aircraft,” Lt. Gen. David Deptula, Dean of The Mitchell Institute for Aerospace Studies, told the National Interest.

This concept is just one part of a broader effort to transform the Pentagon’s Joint All-Domain Command and Control program (JADC2) into a multi-national framework capable of leveraging each F-35 nation as a “node” within a broad, meshed network of otherwise disconnected combat assets and platforms.

“The F-35 is going to be a critical link enabling the concept of JADC2, as it can automatically share information capitalizing upon the aircraft’s unique sensor capabilities,” Deptula said.