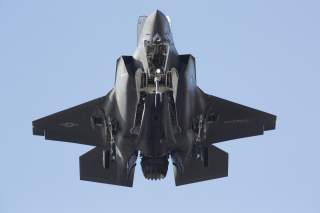 Craparotta said his Marines' "readiness improves every time they come to train" with the South Koreans.

The 653-feet-long Dokdo, which entered service in 2007, is one of South Korea's largest warships. Sister ships Marado is under construction. Dokdo normally embarks an air wing composed of as many as 10 helicopters.

Craparotta's comment could expand the number of vessels the Marine Corps considers as candidate platforms for its expanding force of F-35s. The Marines are buying 340 F-35Bs to replace existing AV-8B jump jets and F/A-18 fighters.

The former chief of the British defense staff, army general David Richards, in 2014 floated the idea of placing American F-35 on British flattops in order to buy time for the Royal Air Force to build up its own force of stealth fighters. "If we can catch up using American aircraft in the intervening period that would make good sense," Richards said.

In theory, any ship that operates AV-8s with some modification also could support F-35Bs. Spain and Italy both operate assault ships embarking AV-8s. Both countries

Besides including more ship types in its F-35 plans, the Marines also are experimenting with larger air wings. The assault ship USS Wasp in March 2019 deployed to the Indo-Pacific region with at least 10 F-35Bs aboard, four more than her normal complement.

But deploying wings of F-35s across more different kinds of ships is consistent with the Marines' concept of "distributed warfare," where forces spread out in order to avoid enemy attack then come together for offensive operations.

At the same time the Japanese cabinet approved the ship modifications, it also endorsed the purchase of 42 F-35Bs from builder Lockheed Martin at a cost of around $5 billion.

There have been reports that Seoul also wants to acquires its own F-35Bs. John Pike, a U.S. military analyst, told CNBC the F-35B would give the South Korean fleet an air-defense capability "that you wouldn't want to mess with."

It's unclear whether the Dokdo-class ships would need modifications to make them compatible with the F-35.