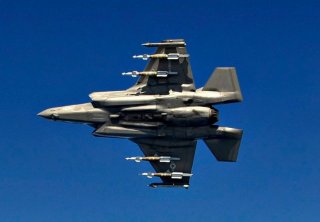 While not an official or even technical term, "Beast Mode" – also known as "Bomb Truck" – is the term used when weapons are carried inside the internal bay and the wing-mounted pylons.

As previously reported, the F-35 is compatible with several weapon layouts to accommodate a wider range of tactical scenarios. The "First Day of War" loadout, while in "stealth" configuration, could consist of four AIM-120 AMRAAM missiles for air-to-air missions, or a mixture of four AIM-120s/GBU-31 JDAM "smart bombs" for air-to-ground missions, all of which would be loaded into the F-35's internal armaments bay. As the name implies, stealth loadouts are designed to minimize radar cross-section and to maintain low observability (LO) when the enemy's anti-air systems are operating at full capacity.

However, as more hostile anti-air systems – including sensors, air defense missiles, gun systems and even enemy aircraft – are eliminated, and the conflict enters into the "Third Day of War," the loadout would change. When the F-35 no longer needs to rely on its stealth and LO for survivability, this is where the "beast mode" comes into play as the F-35 then deploys externally-mounted weapons with a larger radar footprint.

TheAviationist reported that the first images of an F-35B in a "sort of 'Beast Mode'" operating from the flagship Italian carrier were released, and it showed the Lightning II loaded with inert GBU-12s in preparation to launch for the first ski jump short takeoff (STO) flight test.

The Italian Air Force (Aeronautica Militare) has also been operating its F-35A and F-35B in 'beast mode" since last November. The aircraft were assigned to 32° Stormo (Wing) while the 13° Gruppo (Squadron) operated the flights, Airforce-Technology reported. The news was confirmed on social media from the official Twitter account of the Aeronautica Militare, which posted, "The Italian Air Force is the only armed force operating both the F-35A and F-35B. Today for the first time a training mission for two jets loaded with internal and external weapons, configuration known as 'beast mode'."

Italy is one of the two Level II partners on the F-35 Joint Strike Fighter program, and the Italian Air Force took delivery of its first F-35s in 2016. As noted, the Italian Navy is currently testing the first two F-35Bs.