The F-35s Data Collection Capabilities: The Army Wants In On the Action 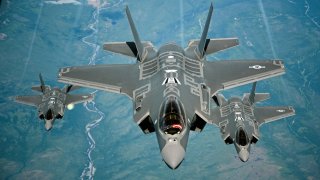 The Air Force is working with the Army to get the data collected by F-35 fighter jets to ground-operating Special Operations Forces (SOF), Marines and Infantry at “machine speed.” It plans to achieve this goal by virtue of leveraging key emerging technologies so that they can quickly transmit time-sensitive data from point to point in real-time without having to first go through a command and control center.

“We are going to get F-35 data to a SOF team at machine speed. We are on a road to make sure that the Army is inside of the F-35 and sharing data instantaneously to take advantage of what the aircraft is seeing and sensing,” Lt. Gen. David Nahom, the Air Force’s deputy chief of staff, plans and programs, told the Mitchell Institute for Aerospace studies in a recent interview.

The goal is to send F-35 data “directly” without having to first route it through a centralized command and control structure. This will allow people in a combat zone to collect, process, and analyze data in order to make crucial decisions at the point of attack. This reduces latency and expedites sensor-to-shooter time. Also, it increases data security by reducing the areas where sensitive targeting information is shared.

This will be prioritized during the Army’s upcoming Project Convergence effort—a combat assessment and exercise slated to take place in the Arizona desert at Yuma Proving Grounds later this year. Last year, Marine Corps F-35B jets succeeded in sending crucial targeting data to Army ground troops in a demonstration that was regarded as a major breakthrough. There is more of that planned for this year because each service wants to contribute substantially to the Pentagon’s Joint All Domain Command and Control (JADC2) effort designed to generate an interconnected “meshed” network of information nodes dispersed throughout an area of operations. The decisionmaking process can happen close to the edge at the point of attack, given the newly discovered technological ability to analyze, distill, organize and transmit data directly and quickly from the point of collection to a series of “effortors” or weapons prepared to respond.

Given the pace at which conditions on the ground can change in warfare or the extent to which fast-arriving new intelligence information drives a need for rapid adjustment, it would seem prudent that F-35 jets be able to communicate seamlessly and in seconds with advancing ground troops. Establishing and refining this kind of connectivity is precisely the intent of the Army’s upcoming Project Convergence, which is an experiment designed to exponentially reduce, truncate, shorten and streamline “sensor-to-shooter” timelines amid fast-changing war circumstances. What used to take as long as twenty minutes, can now happen in seconds due to artificial-intelligence-enabled processing and high-speed data networking. With direct F-35 connectivity, the immediate transmission of intelligence, surveillance, and reconnaissance information, target identification, and decisions about optimal methods of attack can be made at the edge without having to route through a ground-based command and control center governed by lengthy procedures.

This F-35 connectivity and data processing enables warfighters to make decisions about whether to “engage and attack” ahead of or inside of an adversary’s decision cycle.

“We don’t want our warfighters held up from making a decision because mission command procedures and inhibiting our forces from taking action because they are held up by a process,” Nahom said.