F-35s Will Soon Be Right on Russia's Border 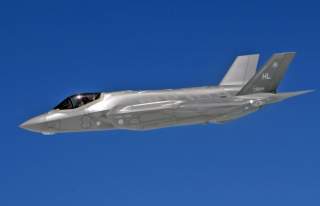 The Polish air force should operate the best aircraft in the world, Duda said.

It looks like Poland will be getting the F-35.

The eastern European country and NATO member is skipping its usual competitive process in order to acquire the Lockheed Martin stealth fighter as early as 2024, according to Jacek Siminski at The Aviationist.

Mariusz Błaszczak, the head of the Polish defense ministry, in February 2019 signed the ministry’s Technical Modernization Plan outlining the country’s weapons priorities. “During the presentation of the plan Błaszczak suggested the procurement of 32 fifth-generation fighters is a priority,” Siminski wrote. “He was probably referring to acquisition of the F-35 -- no other true fifth-generation aircraft is currently available on the market.”

“The F-22 is no longer manufactured and acquiring the Su-57, even though Russia recently suggested that it would be offering it to foreign customers, is simply a ridiculous scenario no one even dares to consider, especially within the current geopolitical context,” Siminski pointed out.

Błaszczak and Polish president Andrzej Duda in April 2019 visited the Polish air force’s 1st Airlift Base in Warsaw, where Duda emphasized the need to replace the air force’s Soviet-made MiG-29s and Su-22s.

The Polish air force should operate the best aircraft in the world, Duda said during the visit. Błaszczak meanwhile called the the F-35 the “key to success.”

For decades Polish pilots have made the most of aging, unsophisticated aircraft. In mid-2001, U.S. Air Force F-15E pilot Guy Razer deployed to an air base outside of Warsaw where the Polish air force's 1st Wing flew MiG-29s.

"We were tasked with introducing Western tactics to them, while we were also responsible for deciding on their ability to operate with us in the near future in a large-force-employment type scenario," recalled Razer, who now is 61 and retired.

Razer recalled thinking that the Polish pilots were pretty skilled, given the limitations of Soviet equipment, doctrine and training.

Warsaw back in 2008 ffrst expressed interest in the F-35. But at the time the single-engine stealth fighter was too expensive for Poland. The plane’s price has fallen as the production rate has increased. The F-35’s unit price by 2019 had fallen to around $80 million. Belgium is buying 34 F-35s for $4 billion. Fighter acquisitions usually include spares, weapons and training services in addition to the planes themselves.

If Warsaw in mid-2019 signed a contract for F-35s, it could start receiving the fighters in 2024, Lockheed officials reportedly told Polish officials.

But buying F-35s fast means bypassing the usual competition. Observers expected Boeing with its F/A-18E/F and F-15, Saab with its Gripen and Eurofighter with the Typhoon plus Lockheed with the F-35 and F-16 all to compete for the Polish tender. “Now it seems that the tender has been already resolved and that the F-35 is going to become the next Polish fighter aircraft,” Siminski wrote.

Siminski for one thinks Warsaw is making a mistake in buying fighters without competitive bidding. “If Poland really wants to acquire the fifth-gen jet, why not do it in a manner that would at least create an illusion of competition? This would be good for P.R. for the Polish MoD, showing that the ministry is capable of carrying out transparent and fair procurement processes.”