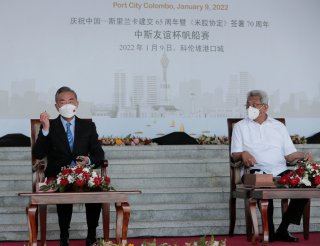 During Chinese foreign minister Wang Yi’s visit to Sri Lanka over the weekend, Sri Lankan president Gotabaya Rajapaksa urged Yi to consider a restructuring of the country’s mounting debt to Beijing. As Sri Lanka has struggled through a severe economic downturn since the start of the pandemic, such an agreement is a near necessity for the island.

Rajapaksa told the visiting Chinese envoy that a restructuring of Sri Lanka’s debt would provide “a great relief” to the country, describing it as a potential “solution to the economic crisis that has arisen in the face of the COVID-19 pandemic,” according to the president’s office.

During his visit, Wang accompanied Mahinda Rajapaksa, the prime minister and the president’s brother, on a tour of Port City, a special economic zone within Colombo, the nation’s capital. Port City, built on a reclaimed island, was primarily developed through Chinese investments.

Having drawn on easy Chinese loans offered through China’s Belt and Road Initiative, Sri Lanka is heavily indebted to Beijing. However, its credit is underwater as a result of the pandemic. Sri Lanka’s current foreign reserves total only $1.6 billion, while its debt obligations exceed $7 billion. $500 million of this sum is in the form of bonds that must be paid in January, raising concerns about Sri Lanka’s financial stability. At the same time, prices in the country have rapidly increased, with an inflation rate exceeding 12 percent in December, up from roughly 10 percent in November.

Financial analysts have argued that the country’s dwindling foreign reserves and increasing debt obligations are due to Chinese construction projects that do not necessarily make back the money invested into them. Such projects include roads across the country, as well as an airport and seaport in the southern Hambantota area.

In total, Chinese loans to Sri Lanka amount to more than $3.3 billion, according to the country’s central bank. This number does not count loans to state-owned businesses, which have also grown in recent years.

China’s loans have been described by some Western commentators as part of a strategy of “debt-trap diplomacy,” in which it loans money to countries that cannot pay it back and uses its leverage to gain political and economic concessions. Critics, however, have denied the strategy’s existence, pointing to instances when Chinese investors have agreed to debt restructuring without demanding extensive concessions.

Wang’s visit to Sri Lanka comes on the tail end of a foreign tour of Africa and Asia. Prior to his visit to the small nation off India’s coast, the Chinese foreign minister had visited Kenya, Eritrea, and the Comoros in eastern Africa.