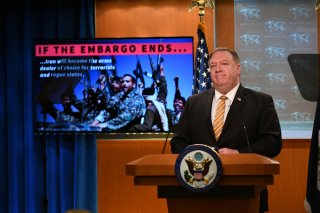 Testifying before Congress, U.S. Secretary of State Mike Pompeo testified that the United States is still dedicated to keeping a United Nations Security Council arms embargo on Iran that is slated to expire in a few months time. He told the Senate Foreign Relations Committee that the United States will introduce a new arms embargo against Iran and should it fail to receive support, it will simply maintain the existing one. It's worth examining what actual legal avenues exist for Washington to extend this embargo and evaluating the political odds of this endeavor.

The Trump administration, having renounced the JCPOA, has demanded for years that neither should expire. The problem is that Washington’s exit from the JCPOA does not trigger the process automatically. Absent the completion of the Dispute Resolution Mechanism (DRM) of the JCPOA, which would essentially eliminate the entire deal, or the passing of an entirely separate arms embargo through the Security Council, they will expire.

The DRM, sometimes also referred to as the “snapback” mechanism, was based on the hypothetical that Iran would violate the JCPOA and is designed in a very manner favorable to the agreement’s other members. The system is very complex, but the essence is that any member of the JCPOA, including Iran itself, can trigger the DRM creating a process by which all the countries involved would work with the International Atomic Energy Agency (IAEA) to determine whether the dispute can be resolved.  If they cannot settle the dispute, the matter would be referred to the Security Council and the resolution to lift the sanctions on Iran would be voted on again. At that point, any of the permanent members of the Security Council (P5) could veto the resolution, effectively ending the JCPOA and reimposing all UN sanctions on Iran.

The Trump administration’s problem is that it left the JCPOA without triggering the DRM itself and, since only participating members of the deal can trigger the resolution or demand that it move to the Security Council, Washington cannot do so now. The United States has claimed that it, in fact, can do just that because UNSCR 2231, the Security Council resolution that endorsed the JCPOA, referred to Washington as a participant. Since the United States has repeatedly announced the termination of its participation in the JCPOA, this is less a serious legal argument and more of a thin rationalization that France and Britain could attach themselves to if they wished to join the United States in trying to reestablish the embargo. This rationale, however, has been rejected by the other JCPOA members including by America’s European allies but most forcefully by Russia. Interestingly, there is no UN mechanism with which this legal disagreement can be adjudicated. There is no parliamentarian in the UN Security Council that can decide who is right.

Europe did, however, trigger the dispute resolution mechanism on January 15 of this year. In their statement on the matter, France, the UK and Germany (E3) claimed that the reason was because of Iran’s abrogation of its JCPOA obligations that it undertook in response to the U.S. withdrawal. The Washington Post reported days later that they did so because Donald Trump threatened a 25 percent tariff on European cars if they continued to refuse. One its face, activating what is effectively a self-destruct sequence for the JCPOA seems to contradict that oft-repeated E3 claim to be committed to the deal. However, European officials have communicated that they do not intend to refer the matter to the Security Council and that they plan to use the DRM process to urge Iran’s full compliance. The E3 can use the mechanism’s various features to drag out the process until after the U.S. presidential elections in November.

Iran has now also triggered the mechanism but also does not wish for the matter to go to the Security Council. While Iran has moved away from some of its obligations, citing Washington leaving the agreement, it had previously not triggered the DRM as the process has no actual benefits for Iran. Instead, activating the DRM risks the matter being referred to the Council, with only negative consequences for Iran.

The other option is for the United States to persuade the Security Council to pass an independent resolution with a new arms embargo. During the recent UNSC hearing on the matter (June 30), Secretary Pompeo called on members to support such a new embargo. His pleas hit a wall of rejection. The New York Times declared that the “U.S. Calls for Indefinite Arms Embargo of Iran, but Finds No Takers” while Foreign Policy magazine carried the headline “World Rebukes U.S. Over Iran.” Russia’s particularly harsh language in criticizing the United States at the meeting indicates that Russia sees the Iran issue as an effective means with which to isolate Washington on the global stage.

Some members, including the E3, also criticized Iran’s foreign policy. While Iran’s foreign policy is not above criticism, it's worth remembering that the E3 are also aligned with Saudi Arabia and Israel in the Middle East and are therefore not independent arbiters on regional security. This fact gets little attention but is a critical feature of the politics underlying virtually every aspect of this row. The Europeans do, however, also believe the JCPOA’s demise would be detrimental to their own security. It is still possible that the E3 will buckle under threats from Trump and go along with a short term extension of the embargo but it seems unlikely after that surprisingly harsh rebuke at the Security Council. U.S. Ambassador to the UN Kelly Craft acknowledged recently that China and Russia are unlikely to cooperate with the United States on Washington’s resolution.

The United States currently has no viable path to reimposing the arms embargo on Iran. It seems to be pinning its hopes on pressuring countries away from selling arms to Iran or making purchases from it. The still escalating tensions between the Washington and Tehran as well as the assassination of Iranian General Qassem Soleimani make any near term resolution impossible and Europe’s triggering of the DRM a deeply risky gambit. The matter will likely linger, with opportunities for geopolitical escalation abound, especially over the next few months as the U.S. presidential election takes its course.

In a sense, Iran’s diplomatic courtship of the Europeans to present itself as the more sensible international actor juxtaposed against the cavalier and intransigent Trump government has worked. Europe has thus far been unwilling to allow Trump to completely destroy the nuclear deal—even though such efforts have not been successful in shielding Iran from economic harm. Many scholars have noted that during the period of escalating sanctions against Iran between 2009 and 2013, Iran was harmed by the erratic behavior of President Mahmoud Ahmadinejad, especially when he was negatively compared to President Barack Obama’s international celebrity status. The Rouhani administration did not want that episode repeated so they appointed Javad Zarif, who is already widely respected and well connected among European political elites, as foreign minister.

Now, Iran has threatened the E3 that if they allow the arms embargo to be reimposed or if they snap back Security Council sanctions through the DRM, Tehran will leave all its obligations under the JCPOA and may even leave the Non-Proliferation Treaty (NPT). Iranian officials have long believed that the provisions of the NPT have been manipulated to politicize and scrutinize its nuclear program. The accusation against Iran pertaining to the actual development of nuclear weapons is, according to the U.S. intelligence community’s National Intelligence Estimate (NIE), that Iran conducted organized weapons research but that it was terminated in 2003. Iran denies ever pursuing such weaponization. Since 2007, when the NIE was released, criticism of the Iranian nuclear program has generally revolved around technical violations of the NPT, especially pertaining to the formal declaration of nuclear facilities and speculation about Iran’s intentions.

The State Department’s own report on weapons of mass destruction published this year concluded that “[d]uring the reporting period, the United States continued to assess that Iran is not currently engaged in key activities associated with the design and development of a nuclear weapon,” but also argued that Iran has not “answered questions” pertaining to its JCPOA and NPT obligations. Whether Iran leaving the NPT would improve its position is debatable, but the Europeans do seem to understand that Iran would have to respond aggressively if the E3 allows sanctions to be reinstated or extends the arms embargo to maintain its credibility in future talks.