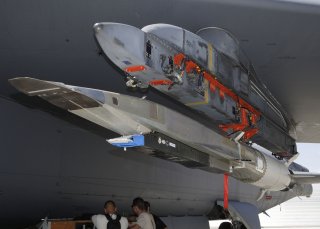 The U.S. Army is making adjustments to ensure its fast-tracked effort to close the hypersonic weapons gap with Russia and China maintains its accelerated delivery schedule and deliver the new Long Range Hypersonic Weapon (LRHW) by 2023.

“The Army decided that we need to move forward rapidly,” Lt. Gen. Neil Thurgood, the director of Hypersonics, Directed Energy, Space and Rapid Acquisition, told an audience at the 2021 Space and Missile Defense Symposium Huntsville, Alabama.

The sped-up timeline is due to several key Army weapons development imperatives to streamline the often multiyear acquisition process through increased digital engineering, early prototyping, soldier evaluations and finding an effective 90 percent solution. For example, formal or traditional acquisition milestones can be spread apart by years, causing unwanted bureaucratic delays. However, various functions can be integrated and soldier evaluations can be prioritized early enough to allow time to refine and improve requirements for the weapon.

“When you’re building the first thing ever, it's pretty audacious to think you know all of the answers. Right? That’s why we have—this is why we do prototyping,” Thurgood said. “Can we develop the answers as we go instead of waiting like we have in the last couple of years?”

Once a prototype is functional, the Army will heavily draw upon soldier input to refine requirements, tactical use possibilities and concepts of operation. Perhaps this could happen earl-on in the process through various kinds of simulation and digital engineering.

“If we begin to build new weapon systems, we have to experiment and see how they fit into the whole structure of our Army. It’s not just the widget itself there,” Thurgood said. “That is insufficient because it is something that is part of an integrated solution that is on the battlespace, creating multiple dilemmas for an enemy. Soldiers have been training on this equipment from day one. We have over 1,000 hours of soldier touch points on the equipment . . . 1,000 hours. Normally, In a traditional program of record, you never have that kind of result.”

Oftentimes, experienced combat soldiers are best positioned to offer key insights into how to best optimize the use or deployment of new weapons systems, as they quite regularly wind up telling developers about ways to use the weapon which had not previously been envisioned.

The LRHW will be road-mobile, transportable via a C-17 Globemaster III, and engineered with a common Army-Navy warhead. It is slated for several upcoming assessments, tests and soldier examinations to ensure it is optimized for quality, reliability and operational functionality before it is delivered.

In closing his remarks, Thurgood was again adamant that keeping to delivery, prototyping and development schedule was of paramount importance. This makes a lot of sense, given that one of his fellow senior Army colleagues developing the LRHW was clear that the United States was “number 3” in the hypersonic weapons race.

“What we need now is to be on time,” Thurgood said. “We’ve got to move fast.”

Kris Osborn is the defense editor for the National Interest.