Fatal Mistakes on the Film Set—Understanding a ‘Prop Gun’ 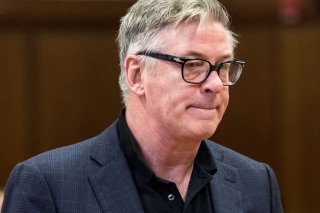 Much has been made of the tragic “accidental-shooting death” of Hollywood cinematographer Halyna Hutchins on the New Mexico set of the movie Rust last week. Numerous reports have continued to use the words “prop gun” to describe the firearm that was fired by actor Alec Baldwin.

However, reports from TMZ and other outlets have made it clear that it was a very real firearm, as it had been used in “target shooting” earlier in the day. Simply put, this isn’t an accident—but rather absolute negligence. A live gun—any gun capable of firing live rounds—has no place on a film set and such a weapon should never be referred to as a prop.

“First, there is even confusion on the use of the term "prop guns,’ and the ones that fire are never called ‘prop guns’ by those of us who understand such things,” Bill Davis of Tactical Edge Group, and a prop master for more than thirty years, previously told me for an article on the subject of Hollywood firearms. “The guns that fire aren’t props. There are those real guns that have been modified to fire blanks. So it is important to note that the word ‘prop’ actually means it is non-functional.”

It is also important to note too that firearms modified to fire just blanks need to be carefully handled. Actors have been killed assuming blank firing guns aren’t dangerous. Actor Jon-Erik Hexum was killed in October 1984 on the set of the TV show Cover Up when he pointed a blank-loaded .44 Magnum revolver at his head and pulled the trigger. The force of the blast was strong enough to fracture his skull, and he died days later in the hospital.

Real Gun on a Film Set

Last week’s tragedy unfolded because normal procedures weren’t followed. First, a live gun was on a movie set while blank ammunition was kept near live rounds. Any armorer—the person responsible for firearms on a movie set—will tell you that should absolutely never happen. Yet, according to the Associated Press, the gun was one of three that the film’s armorer, Hannah Gutierrez, had set on a cart outside the wooden structure where a scene for the western was being filmed. As the armorer, Gutierrez was responsible for providing the firearms. Next, the production’s assistant director Dave Halls retrieved the firearm (not a prop) and handed it to Alec Baldwin, declaring it “cold.”

Instead of checking each chamber of the revolver—which is always standard practice by Hollywood armorers—Halls simply assumed it was unloaded. Baldwin then broke the first rule of gun safety, which is to always assume a gun is loaded, and he too failed to check to ensure that the firearm was safe.

Armorers, who also act as “gun wranglers” are supposed to be the only person on set to have access to any firearms, which are handed directly to the actor prior to a scene and then retrieved after the cameras stop rolling.

Numerous outlets have asked the same question this week, “Why are real guns used on film sets?” As noted, the truth is that they really aren’t. As noted, live guns have no place on a set—but the question could be asked why blanks are even needed?

Craig Zobel, director of the Emmy-winning HBO miniseries Mare of Easttown, posted on social media, “There’s no reason to have guns loaded with blanks or anything on set anymore. Should just be fully outlawed. There’s computers now. The gunshots on Mare of Easttown are all digital. You can probably tell, but who cares? It’s an unnecessary risk.”

Computer generated imagery (CGI) may not be practical for all productions, especially indie films that have limited budgets. Moreover, it is still important to note again that this wasn’t an accident. This was a tragedy because people didn’t do their job, rules were broken and most notably, safety procedures and protocols weren’t followed. The end result is that woman is dead because of it.

“There’s basic safety measures on every set,” Mike Tristano, an armorer who has worked with Alec Baldwin in the past, told the BBC. “You never point a gun, even if it is not a firing gun, at anyone else. I’m at a loss how this could have happened and how it could have done that much damage.”