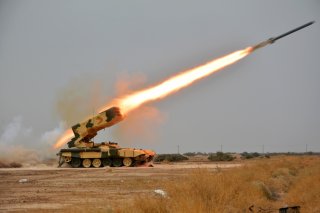 As the invasion of Ukraine stretches into its seventh day, Russian forces are preparing to intensify their sweeping airstrike campaign against the country’s major population centers.

Reports trickled in earlier this week that Russian forces in Ukraine are deploying the capability to use cluster and vacuum bombs. Ukraine’s ambassador to the United States, Oksana Markarova, alleged on Monday, without providing further details or corroborating evidence, that the Russian military has already used a vacuum bomb on Ukrainian territory.

"We have seen videos of Russian forces moving exceptionally lethal weaponry into Ukraine, which has no place on the battlefield. That includes cluster munitions and vacuum bombs—which are banned under the Geneva Convention,” said Linda Thomas-Greenfield, U.S. ambassador to the UN. “To the Russian soldiers sent to the front lines of an unjust, unnecessary war, I say your leaders are lying to you, do not commit war crimes, do everything you can to put down your weapons and leave Ukraine,” she added on Wednesday.

A thermobaric weapon, sometimes referred to as a “vacuum bomb,” is a type of explosive that sucks in oxygen from the surrounding air to generate a high-temperature explosion. As they are capable of producing a larger blast wave than conventional condensed explosives, the use of thermobaric weapons is widely condemned by international human rights organizations. White House press secretary Jen Psaki said the Biden administration does not have confirmation that vacuum bombs were used in Ukraine, but added that the use of such weapons “would potentially be a war crime.” Russian troops are confirmed to have used thermobaric weapons during the Second Chechen War in 1999 and were accused of employing them against rebel fighters during Russia’s intervention in the Syrian Civil War.

Russian forces conducted an airstrike in the area surrounding Kiev’s television tower on Tuesday, reportedly killing five people who were nearby. Ukrainian officials added that the strike disabled Ukraine’s central television channels. Authorities reported six deaths in the northeastern city of Kharkiv following the latest round of Russian shelling in the region.

The continued Russian airstrikes are accompanied by ongoing movements of Russian ground forces, particularly to Ukraine’s south. Russia’s Defense Ministry announced earlier this week that Russian and pro-Russian separatist forces have fully blocked Ukraine’s access to the Sea of Azov. Local officials say parts of the Black Sea coastal city of Mariupol have been “nearly totally destroyed” amid constant Russian shelling. The Ukrainian military is preparing for a large-scale Russian ground assault on the nearby strategic port city of Odessa, with local officials already reporting rocket attacks on the city’s outskirts.