Russia Begins Invasion of Ukraine With a 'Shock and Awe' Campaign 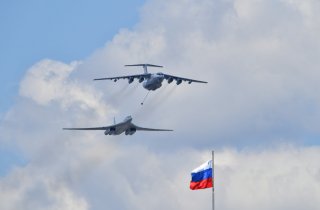 Russia’s months-long military buildup on the Ukrainian border concluded on Thursday with a large-scale invasion of Ukraine. The attack opened with a wave of cruise and ballistic missile strikes against Ukrainian military infrastructure. Explosions were initially recorded in the cities of Kharkov, Odessa, and Kiev. The Russian military operation is also being carried out in western Ukraine, and there have been reports of attacks on the cities of Ivano-Frankivsk and Lutsk.

Russia’s Defense Ministry said on Thursday that its forces destroyed as many as seventy-four “objects of above-ground military infrastructure” in Ukraine, including eleven airfields, three command centers, numerous radio stations, and a naval base. Ukrainian naval forces have been almost entirely destroyed or rendered unusable.

The initial attack was not confined to airstrikes alone; Ukrainian officials reported on Thursday that Russian forces took control of the Antonov airport, located some twenty-five miles from the center of Kiev. There have been unconfirmed reports of a Russian amphibious landing in the major Black Sea port city of Odessa. Although Odessa appears to remain under Ukrainian control as of the time of writing, there have been reports that at least parts of the coastal city of Mariupol had been taken over by pro-Russian separatist forces. Ukrainian authorities have warned civilians to report sightings of suspicious activity or suspicious individuals wearing red articles of clothing.

Thursday’s assault was prefaced by a surprise address from Russian president Vladimir Putin. Putin, without elaborating on specific political aims, framed the action as a “special military operation.” He ended his speech with a stark warning to the United States and European nations not to intervene: “Anyone who tries to get in our way, let alone tries to threaten us and our people, should know that Russia’s answer will be immediate, and it will lead to consequences of the sort that you have not faced ever in your history.”

During a Thursday conference call with reporters, Kremlin spokesman Dmitry Peskov insisted that Moscow has no plans to occupy Ukraine. Peskov said Moscow seeks to “demilitarize” and “cleanse” the country of “Nazis,” echoing Putin’s earlier assertions that Ukraine has been taken over by an ultra-nationalist “junta” that poses an existential threat to Russia’s security.