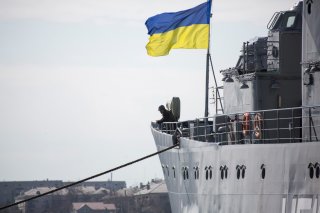 When Russian forces seized the Crimean peninsula in March 2014, they also wound up stealing most of Ukraine’s navy, including a half-dozen corvettes, the Ukrainian Navy’s only submarine, and even its attack dolphin program. Furthermore, up to seventy-five percent of personnel abandoned their posts or defected to Russia—including the head of the Navy itself.

Moscow eventually did return some of the older vessels to Ukraine but ended the transfers as Russian forces intervened more overtly in the conflict over Eastern Ukraine.

Deprived of Sevastopol’s extensive facilities, the Ukrainian Navy’s main bases are now situated at the western Ukrainian port cities of Odesa and Mykolaiv. The service’s only significant warship is the anti-submarine frigate Hetman Sahaydachniy, which had been deployed on an anti-piracy mission off Somalia during the coup-de-main.

Ukraine’s naval aviation now retains only a few transport planes, eight Mi-14 and Ka-27 anti-submarine/search-and-rescue helicopters, and two Be-12 seaplanes. Ironically, the Navy’s ground forces have seen the most growth, with the naval infantry brigade expanded in recent years to a division-sized formation of four infantry brigades and one brigade each of rocket and coastal artillery.

But when two of the new gunboats attempted to transit to a base at Berdyansk on the Sea of Azov in November 2018, Russian naval forces harried and ultimately captured the small craft and their crews as they attempted to traverse the Kerch Strait. (They were eventually released.) The incident highlighted how Russia could deny vessels in western Ukraine access to the coastline in the east including the key port of Mariupol.

Kiev remains set on building a ‘mosquito fleet’ of small, fast, and stealthy short-range patrol and fast attack craft which theoretically could prove more survivable and useable than large frigates and destroyers. And NATO member states are furnishing much of the new force, some of it for free.

For example, Washington has already donated three out of a planned five ex-Coast Guard Island-class patrol cutters to Kiev. The 110-foot cutters are armed with a rapid-firing 25-millimeter cannon and two machine guns and their sixteen-person crews are being trained in the United States. The United States is also reportedly studying ways to mount heavier weaponry to meet Ukrainian requirements.

The State Department likewise authorized sale of up to sixteen Mark VI patrol boats for $600 million, eight of which have already been transferred via U.S. military aid packages. These eighty-five-foot boats are smaller and faster at forty-five knots than Island-class cutters, and more heavily armed with two 30-millimeter Mark 44 Bushmaster II chains guns as well as two 25-millimeter cannons.

The U.S. also reportedly offered to donate decommissioned Oliver Hazard Perry-class frigates, but the proposal seems to have received little traction, likely due to the higher costs of refitting and operating such large and capable warships.

Meanwhile, in December 2020, London signed a memorandum with Kiev agreeing to extend a 10-year £1.25 billion ($1.73 billion) loan to pay for construction of eight 580-ton Barzan-class fast attack craft (FACs)—the first two in British Babcock shipyards in Portsmouth, and the last six in Ukraine. Supposedly construction could begin 2022-2024 timeframe, though the status of the deal remains unclear.

First built for Qatar’s navy in the 1990s, the Barzan is speedy at thirty-five knots and mounts a total of eight Exocet MM40 Block 3 missiles with a range of over 110 miles, 76- and 30-millimeter turret guns, and a six-shot Mistral short-range air defense system. That’s a lot of punch for boats of that size, though they’re constrained in range (2,070 miles).

London also is donating two freshly decommissioned 600-ton Sandown-class minehunters to Ukraine. The pokey fiberglass-hulled vessels have tethered SeaFox mine-disposal systems and can undertake some patrol duties thanks to their 30-millimeter cannon and machinegun armament.

Turkey is also exporting up to forty-eight TB2 Bayraktar combat drones to Ukraine, six of which are going to the Navy for maritime patrol missions. The Bayraktar carved out an impressive combat record in 2020, but its armament of shorter-range anti-tank missiles means its more practical for surveillance and engaging ships without significant air defenses.

NATO navies are also seeking to mentor Ukrainian personnel and improve inter-operability with NATO vessels active in the Black Sea.

Of course, one shouldn’t overlook Ukrainian shipbuilders, who built aircraft carriers for the USSR.  One completed project is the spy ship Simferopol fitted with signals (SIGINT) and electromagnetic (ELINT) spy equipment to monitor Russian military activities in the Black Sea.

Kiev also has allocated money to complete the heavily armed Project 58250 multi-role corvette Volodymr Velykyi laid down in Mykolaiv way back in 2011 and then abandoned in 2014. If ever completed, the Volodymr could be followed by three sister ships, all similarly armed to the Ada-class.

However, corvettes are larger and more expensive to operate than fast attack boats, leading some commentators to fear money allocated to them threatens to compromise Ukraine’s mosquito-fleet concept.

But arguably the most important Ukrainian naval project isn’t a ship but rather an anti-ship missile called the R-360 Neptune, which debuted in Ukrainian service this year.

Evolved from the Soviet-era Kh-35 missile, the five-meter-long weapon has a maximum effective range of 174-186 miles, and is boosted into the air by a rocket booster before switching to turbojet propulsion as it skims five to fifteen meters above the surface at subsonic speed. Initially relying on inertial navigation, the Neptune’s jam-resistant radar seeker can detect and home in on ships up to thirty-one miles away within sixty degrees of its vector.

Three to five batteries with six truck-based launchers each are planned. Each launch truck has a four-cell container launcher and is accompanied by a second and possibly third truck with four reloads each, for a total of forty-eight to seventy-two missiles. Large salvo fires may indeed be necessary to overwhelm naval air defenses that are relatively efficient versus subsonic missiles.

R-360s may also be installed on Ukraine’s forthcoming corvettes, proposed but so far unrealized Vespa-class missile boats, and remaining Su-24 supersonic bombers. That could extend the missile’s threat range, but the land-based batteries arguably will remain more survivable and help create ‘anti-access’ bubbles along Ukraine’s coast.

Given the Russian Black Sea Fleet’s dominant firepower in the waters around Ukraine, some may argue that rebuilding the Ukrainian Navy is a fool’s errand. For example, in a 2008 war, Georgia’s Navy was destroyed, mostly in port, without imposing any costs on Russian forces.

And in the awful contingency of higher intensity conflict, Ukraine’s drones and fast and stealthy boats could locate hostile ships in Ukraine’s littoral waters for land- and sea-based anti-ship missiles to attack, deterring hostile vessels from operating close to Ukraine’s coastline or executing amphibious landings.

Admittedly, pulling off such a strategy while under stress from electronic warfare and air strikes would remain challenging, but Kiev can only invest in asymmetric capabilities given its difficult security situation in the Black Sea.