This French Fighter Could Soon Be Russia's Next Big Military Problem 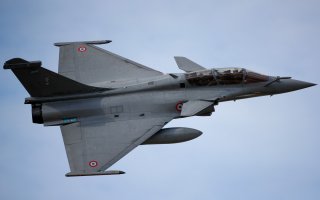 The Ukrainian Air Force is in a tough spot. It has not had a single new aircraft delivered since the dissolution of the Soviet Union thirty years ago. But a recent Russian troop buildup in the Crimean Peninsula highlights the distinct possibility (but fortunately not inevitability) of intensified military conflict with Ukraine’s more powerful neighbor. And in 2014 combat operations Ukrainian warplanes suffered heavy losses to Russian missiles.

In May 2020, Kiev announced plans to spend up to $7.5 billion over the next fifteen years reinventing its air force by procuring thirty-six to forty-two advanced multi-role jet fighters. France is reportedly optimistic its 4.5-generation Rafale fighter is right for the job—and willing to provide the financial backing to make it happen.

French president Emmanuel Macron is expected to promote a Rafale sale in a visit expected this summer. Kiev may depend more on French support with the forthcoming retirement of German chancellor Angela Merkel.

Revitalizing Ukraine’s outdated air force is unavoidably a long-term project. Officially, the plan is to acquire six to twelve warplanes between 2023–2025 to begin familiarizing personnel, followed by another thirty aircraft acquired between 2025–2030. These would replace Ukraine’s short-range MiG-29 Fulcrum fighters.

The Rafale is a surprising favorite because it is a more expensive option than U.S. jet fighters or Swedish Gripen jets also under consideration. But Paris is optimistic that a guarantee of up to 85 percent of a loan to Kiev to pay for a Rafale buy (for which €1.5 billion has already been set aside) will seal the deal.

France also points to an existing commercial mechanism to sell aircraft to Ukraine established for a €551 million deal for 55 Airbus helicopters.

Paris and Washington may also offer fighters on generous terms as part of a longer game: to prevent China from purchasing Ukraine’s Motor Sich engine manufacturer.

Chinese firms have had difficulty producing high-performance turbofan engines for their jet fighters. Motor Sich’s tech could contribute to overcoming that technological bottleneck.

Chinese tycoon Wang Jing already owns a 56–76 percent stake of Motor Sich, but Ukraine has nationalized the company due to pressure from Washington. A rumored purchase of Motor Sich by French engine builder Safran could close off that possibility for good.

Besides, generous foreign assistance is a prerequisite to UAF modernization, as the service’s annual budget is only $300 million a year—equivalent to the purchase price of just three Rafales. On that budget, UAF pilots can only fly a handful of hours per year.

Even a successfully managed modernization of the Ukrainian air force would take many years before it results in useable warplanes for Ukraine.

“Re-equipping Ukraine with a classic air force would ... require complete rebuilding of the local support infrastructure, retraining of all the personnel, growing an entirely new generation of personnel from bottom up all the way up to growing new commanders—and then it would take years to deliver all the aircraft. Then one would still have to bring the aircraft in question up to date with modern technology, equip them with modern weapons and comm systems and then train their air and ground crews.”

And all that would still leave the UAF thoroughly outgunned by Russian aviation and vulnerable to missile attack. Investing in cheaper unmanned aerial systems and land warfare might far more relevant to shoring up Ukraine’s precarious military situation in the near term.

Of course, if Ukraine manages to avoid intensified hostilities with Russia, it will want to have sown the seeds to regrow its air force while it retains experienced personnel.

That sounds formidable, but Ukraine’s combat aircraft have received few upgrades since the dissolution of the Soviet Union, leaving them vulnerable to modern anti-aircraft weapons.

Back in 2014, Ukraine initially committed its warplanes to its campaign against Russian-backed separatists in eastern Ukraine. However, Moscow provided short- and medium-range surface-to-air missiles to the rebels—and intervened on the battlefield in August. Land-based missiles and fighters shot down five Ukrainian Su-25s, two MiG-29s, and a Su-24, as well two transport and surveillance plane, forcing the service’s withdrawal from combat operations.

As Ukraine is now unlikely to buy warplanes from Russia, Kiev must consider more expensive Western combat aircraft. It will want jets it can afford to operate that are resilient to the surface-to-air missile threat. Ukraine doesn’t require long-range warplanes to defend its border, though such jets do allow for more flexible basing.

The twin-engine Rafale brings to the table its powerful SPECTRA electronic warfare system and trim radar cross-section of 1 m2. The French military considered that combination sufficient to allow Rafales to operate over Soviet-era air defense systems in Libya. The Rafale also is highly agile and is designed for operations from more rugged airstrips.

The U.S. jets also are an option. Washington has considerable political clout and already provides substantial military equipment and training to Ukraine. Furthermore, U.S.-guided weapons like the AIM-120 or JDAM bomb are cheaper and more diverse than French weapons.

An editorial by Stephen Blank for the Atlantic Council advocates that Washington donate inactive reserves of F-15 or F-16C jets, and E-2 radar planes, and KC-135 tankers, to Ukraine in a “Lend-Lease” package to deter Russia.

However, older aircraft may prove difficult to support, and the political will to give aircraft away for free (and increase tensions with Russia) isn’t evident. For that matter, Ukraine couldn’t begin to afford operating the 100 Western combat jets Blank calls for, even were they provided for free.

The “economy choice” for Ukraine remains the single-engine Lockheed F-16, the latest model of which is heavily upgraded. However, the F-16 doesn’t offer any particular counter to the surface-to-air missile threat other than using standoff-range weapons like the JASSM cruise missile.

Boeing’s short-range FA-18E/F Super Hornet, by contrast, has a reduced radar cross-section like the Rafale’s, and comes in an EA-18G Growler electronic attack model specifically designed for countering air defenses.

Ukraine’s air force chief has also expressed interest in the Boeing F-15EX, which is fast, long-ranged, and can carry heavy payloads, allowing it to replace the Su-24 jet’s strike capability. However, the F-15 is indiscrete on radar and costly to operate.

Finally, Sweden’s Saab Gripen-E jet may appeal to Ukraine due to its low operating costs, reduced-radar cross-section, and powerful electronic warfare capability. However, Sweden lacks the diplomatic and financial muscle to sweeten the deal as much as France or the United States.

Overall, Kiev doesn’t lack for 4.5-generation fighter options—but its biggest challenge remains determining whether investing long-term in jet fighters is the best use of its limited finances in a context of continuing tensions with Russia.

Sébastien Roblin writes on the technical, historical, and political aspects of international security and conflict for publications including  The National Interest, NBC News, Forbes.com , and War is Boring. He holds a Master’s degree from Georgetown University and served with the Peace Corps in China. You can follow his articles on Twitter.