Will Taiwan Get the New F-16V Fighters It Desperately Wants? 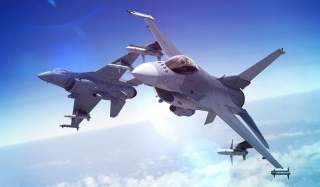 On July 8, the U.S. State Department announced it would approve a $2.2 billion arms deal with Taiwan including 108 Abrams main battle tanks and 250 Stinger man-portable surface-to-air missiles—a deal which elicited new sanctions from Beijing on the companies involved.

But the announcement was more notable for what the approval didn’t include—a nearly done-deal for sixty-six F-16V jet fighters built fresh off the F-16 production line in Greenville, South Carolina.

This would have been the first sale of new Western combat jets to Taiwan since 1992—a fact not unrelated to Beijing’s claims that sales of jet fighters to the “renegade province” constitute a redline.

This stance caused three prior U.S. presidents to shy away from additional jet sales, but from the beginning, the Trump administration has proven consistently willing to disregard Beijing’s sensitivities regarding Taiwan.

The absence of the F-16V deal from the July 8 approval was likely linked to U.S.-China negotiations to end a simmering trade war. Perhaps the Trump administration delayed or canceled the F-16V approval to avoid sabotaging the talks, or is withholding the jets as a possible bargaining chip to extract concessions from Beijing.

For now, the deal’s fate remains uncertain as Taipei and its allies in Congress lobby strongly for it to proceed.

Taiwan’s existence as de-facto independent polity is a sensitive issue in mainland China, as the island became a bastion of the Chinese Nationalists defeated by Mao’s Communists on the mainland in 1948. Since Taiwan democratized in the 1980s, regular skirmishes have given way to renewed diplomatic and economic ties with mainland China.

Taiwan still designates itself as “the Republic of China,” and some Taiwanese favor gradual reunification. However, recent surveys and elections suggest a growing majority prefer the island maintain its independence. Beijing has long countered that it reserves the right to invade Taiwan to prevent such a long-term outcome.

The new M1A2T tanks mark a significant improvement on the over 1,000 Cold War-era Patton main battle tanks operated by the Republic of China Army. These include both M48 and M60 models, and Taiwanese hybrids called the CM11 and CM12. The Pattons’ 105-millimeter guns have dicey odds at best at penetrating the frontal armor of modern People’s Liberation Army (PLA) Type 96 and Type 99 tanks, which in turn could easily penetrate the Patton’s old-fashioned steel armor with their 125-millimeter guns. The Abrams brings to the table an even more powerful 120-millimeter gun and formidable Chobham composite armor, though likely not incorporating the advanced depleted-uranium armor package used in U.S. Army Abrams.

However, some commentators have disparaged the tank purchase. While ROC tanks in the past crushed a poorly supported Chinese amphibious landing in the Battle of Guningtou, a modern conflict over Taiwan would likely be won or lost in the air and sea before land forces enter the picture. That’s why the F-16V buy was seen as a big deal.

Not only do China’s 1,700 combat aircraft outnumber Taiwan’s 380 combat jets (including ninety-three combat-capable two-seat trainer variants)—the PLA is also fielding increasing numbers of 4.5-generation jets like the J-11D and Su-35, as well as a handful of fifth-generation J-20 stealth fighter, that outperform even Taiwan’s F-16s, Mirages and F-CK-1s.

In 2018, the PLA Air Force displayed its improved capabilities by dispatching H-6 bombers and escorting fighters on patrols that effectively “encircled” Taiwan—showing that it could attack from the east as well as the direct route from the west. In April 2019, instructions by Chinese J-11s across the “median line” demarcating Taiwanese airspace led President Tsai Ing-wen to declare the ROCAF would henceforth “forcibly expel” future intruders.

Because Beijing has made it extremely difficult for Taiwan to acquire modern jet fighters, the ROCAF has had to focus on modernizing older ones. Thus, Taiwan has unsuccessfully explored upgrading its fifty-five French Mirage 2000-5 jets, and recently completed upgrades of its 102 domestically-built F-CK-1 jets to an improved C and D models.

Taiwan’s biggest coup to date has been a $5.3 billion deal to upgrade its 144 F-16A and B Block 20 jets to a cutting-edge F-16V or “Block 72” configuration. Roughly twenty-five F-16As and B are being upgraded per year.

While the F-16 is renowned for its exceptional agility, twenty-first-cenutry aerial warfare is thought to depend foremost on which side detects and effectively engages the other first from beyond visual range. Thus, the F-16V’s most significant improvement is the introduction of an APG-83 Active Electronically Scanned Array radar with greatly improved range and resolution, the capability to track twenty targets simultaneously, and superior jamming resistance.

F-16V pilots also benefit from a Helmet-Mounted Cueing System to lock on to adversaries within visual range simply by looking at them, rather than having to train their aircraft’s nose towards them. These are linked with new AIM-9X Sidewinder missiles designed to engage targets up to 90 degrees “off-boresight.”

The upgrade deal was bundled with authorization to purchase AIM-9X missiles, as well as new electronic warfare pods, precision-guided glide bombs, CBU-105 cluster bombs, and Sniper targeting pods for use with those bombs. A subsequent deal in 2017 authorized sale of standoff-range AGM-154C JSOW cruise missiles and AGM-88B HARM radar-homing missiles, raising the prospect Taiwan was developing the capability to launch aerial counterstrike on the mainland.

If the order for the sixty-six brand-new F-16Vs goes through, the newly-built jets may incorporate additional upgrades that haven’t been retrofitted into Taiwan’s F-16As: higher-thrust F110-GE-129 or -132 engines and possibly conformal fuel tanks (CFTs). Resembling muscly bulges slung along the F-16’s upper fuselage, CFTs are a substitute for wing-mounted drop tanks, which impinge on aerodynamics, radar cross-section and payload capacity.

Both upgraded and newly built F-16Vs serve with or are on order for Bahrain, Bulgaria, Greece, Morocco, Slovakia and South Korea.

Taiwanese media has claimed the F-16V deal may cost $7.8 to $8 billion. While that seemingly implies a surprisingly stiff $121 million per aircraft for an ostensibly low-cost jet, the deal is almost surely rounded out with maintenance packages, munitions, spare parts and training support.

Taiwan had previously considered operating F-35 Lightning II stealth jets, but decided not to due to the type’s operating expense and ongoing teething issues. Washington may also have feared F-35 technology could be leaked to mainland China.

While sixty-six more F-16Vs would help Taiwan diminish a rapidly growing capability gap with the PLA Air Force, that gap still yawns wide—particularly because Taiwanese fighter units will remain vulnerable to attack while on the ground by the hundreds of short and medium-range ballistic missiles the PLA has arrayed to barrage the island in the event of a conflict. The ROCAF has tried to mitigate the threat from such plunging missiles by building air bases in hollowed out-mountains like the lair of a James Bond villain, and also demonstrated its F-16s can land on highways.

Given mainland China’s ever-growing quantitative and even qualitative edge, Taiwan can only gamble that procuring new jets and pursuing projects like domestically-built submarines may nonetheless raise the perceived costs of using military force against it.