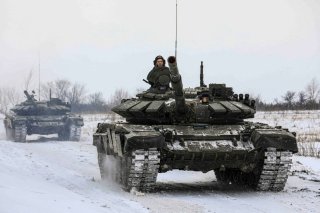 One day after the Kremlin’s recognition of the Donetsk and Luhansk separatist “republics” in Ukraine’s eastern Donbass region, Russia has launched airstrikes on targets within Ukraine and commenced a ground invasion of the country. Russia's assault officially started what is likely to be the largest European conflict since the end of the Second World War.

The attack began shortly after Russian leader Vladimir Putin announced the onset of an unspecified military operation in eastern Ukraine, which he claimed was necessary to protect Russian civilians within the disputed Donbass territories. In his remarks, Putin blamed the conflict on the United States, which he argued had refused to offer Moscow security guarantees in the run-up to the conflict. Putin insisted that his troops would not occupy Ukraine and are only present in the country to “demilitarize” and “de-Nazify” it. He advised Ukrainian soldiers to desert their posts and return home to avoid taking casualties. Putin claimed in his remarks that the conflict would immediately end if Ukraine renounced its aspirations to join NATO, demilitarized its forces in the Donbass region, and recognized Russia’s sovereignty over the Crimean Peninsula, which the Kremlin invaded and annexed in 2014.

Putin’s remarks were lambasted in Kyiv and around the world, and it was widely noted that Russia had launched a coordinated offensive war on Ukraine after months of publicly denying that it was considering such a move. Others noted that the mechanism by which the war had begun—a Russian intervention following a request for assistance from the separatist republics—had been predicted months in advance by the United States, which had repeatedly warned of an invasion in the weeks leading up to the conflict.

As Putin’s speech was aired, a series of explosions went off in major Ukrainian cities, including Kharkiv and Kyiv. “Putin has launched a full-scale war against Ukraine,” Ukrainian foreign minister Dmytro Kuleba wrote on Twitter. Strikes continue on peaceful Ukrainian cities.” Kuleba later wrote that, in spite of the Russian invasion and Putin’s demand that Ukrainians desert, “no one is running away.”

“Army, diplomats, everyone is working,” Kuleba said. “Ukraine fights. Ukraine will defend itself. Ukraine will win.” Ukrainian president Volodymyr Zelensky confirmed later in the evening that the country would not capitulate to the Kremlin. Speaking in Russian in an appeal to Russians and the Russian-speaking population in eastern Ukraine, Zelensky said, “The people of Ukraine and the government of Ukraine want peace.” He continued: “But if we come under attack, if we face an attempt to take away our country, our freedom, our lives, and [the] lives of our children, we will defend ourselves. When you attack us, you will see our faces, not our backs.”