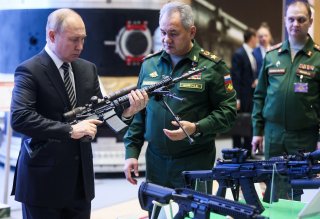 Russian president Vladimir Putin insisted on Tuesday that Western military officials should drop their “aggressive line” towards Moscow, weeks into a crisis in which Russian troops have massed on the country’s border with Ukraine—prompting widespread fears that an invasion may be imminent.

In defense of Russia’s actions, Putin claimed that the country had “nowhere to retreat,” characterizing it as having given substantial ground in a geopolitical competition with the United States.

“What the U.S. is doing in Ukraine is at our doorstep,” Putin said, citing U.S. and NATO aid to the Ukrainian military and the presence of U.S. troops in the country. “They should understand that we have nowhere further to retreat to. Do they think we’ll just watch idly?”

“If the aggressive line of our Western colleagues continues, we will take adequate military-technical response measures and react harshly to unfriendly steps,” Putin continued. Although the meaning of these words was unclear, some have speculated that he was referring to the positioning of intermediate-range nuclear missiles in Russian Europe, in response to reports of NATO’s plans to station similar missiles in Eastern Europe pointing east.

So far, in spite of the troop buildup, Moscow has denied that it is considering an invasion of Ukraine. However, it has pushed for NATO assurances that the North American and European military alliance will not conduct military exercises in Eastern Europe, including the post-Soviet Baltic states, all of which are NATO members, as well as Ukraine.

The Ukraine crisis has centered around the war in the country’s eastern Donbass region, which is where pro-Russian separatist rebels have attempted to create a pair of independent proto-states, Donetsk and Luhansk, in their territory. Although it openly sympathizes with the rebels, Russia has denied sending troops to participate in the conflict, although Putin has admitted that Russian military officials were present in the territory in the past and there has been some evidence of a continued Russian presence.

Although the United States has offered aid—first non-lethal under President Barack Obama and then lethal aid under President Donald Trump—to the Ukrainian military, Russia has also accused Washington of participating directly in the conflict. Russian defense minister Sergei Shoigu claimed that more than one hundred U.S. contractors were fighting in Donbass and indicated that they had used or were preparing to use chemical weapons. Pentagon spokesman John Kirby described this claim as “completely false.”