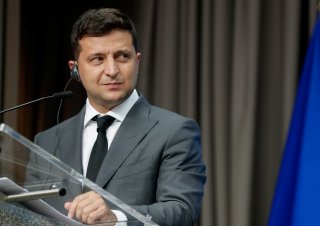 The Russian government has expressed anger at NATO efforts to supply Ukraine’s military with modern, high-tech weapons, arguing that those weapons would be used to provoke a conflict with Moscow.

The outcry comes during a period of heightened tensions between Russia and Ukraine. Since its Euromaidan revolution in 2013–2014, Ukraine has pursued a pro-European Union foreign policy, drifting away from Russian orbit and signing cooperation agreements with the EU and with NATO. Russia has antagonized Ukraine by annexing the Crimean Peninsula in 2014 and aiding pro-Russian separatist militias in Ukraine’s eastern Donbass region for the past seven years.

In recent months, more than ninety thousand Russian troops have congregated near the Ukrainian border, raising fears of an open invasion—and preceding U.S. sales of lethal military equipment to Kiev, most prominently including Javelin anti-tank missiles, which was first allowed under the administration of President Donald Trump. The controversy surrounding the release of lethal military aid to Kiev, which Trump allegedly attempted to connect to political prosecution of then-former Vice President Joe Biden’s son Hunter in a phone call with Ukrainian President Volodymyr Zelensky, led to Trump’s first impeachment and ultimately his acquittal in a high-profile Senate trial.

The number of provocations that Ukraine was launching against Russia “is growing and growing significantly,” Kremlin spokesman Dmitri Peskov said on Monday. “These provocations are being carried out with weapons being supplied by NATO countries—and we are observing this with great alarm.”

Moscow has argued that, instead of simply accepting the weapons, Ukraine used them in provocations along the Ukrainian-Russian border, attempting to incite a wider military conflict at the behest of the United States. Kiev has denied doing this, insisting that existing provocations have only come from the Russian side and further military purchases help to ensure its independence.

Western nations supplying arms to the Ukrainian government, including the United States and the United Kingdom, offered no comment.

For its part, Russia has publicly denied intending to invade Ukraine. Peskov indicated on Monday that Russian troops had not increased on the Ukrainian border, claiming that such accusations represented “hysteria,” and implied that the United States was attempting to “whip up” anti-Russian sentiment by making them.