Fire! Russia’s T-14 Tank Has Now Been Tested in Syria 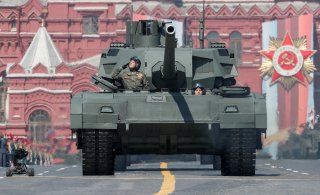 Speaking to a Russian television station on Sunday, the Russian Minister of Industry and Trade Denis Manturov said that Russia’s newest, and possibly most capable tank ever, has undergone field testing in Syria. “Yes, that’s right. They [the Armata tanks] were used in Syria,” he said to Russia’s Rossiya-1 television channel. “They were used in field conditions, in Syria, so, we took into account all the nuances,” Tass reported.

This would be a first for the platform, which despite some early hiccups, is at least on paper perhaps one of the more capable tanks in any country’s inventories. It was first shown to the public on May 9, 2015, during Russia’s annual Red Square Victory Day parade which commemorates the Soviet Union’s victory over Nazi Germany during the Second World War.

Tass also reported that the T-14 would finally enter serial production sometime in 2021. “It [the T-14 Armata tank] is expensive because it is still undergoing extra trials and modernization after the defense ministry requested additional technical solutions in order to begin serial supplies starting from the next year under the existing contract,” said Manturov.

The T-14 platform has experienced delays before. The Russian producer of the T-14, Uralvagonzavod, had previously given 2020 as the T-14’s serial production entry date, so it would appear that that date has been pushed back.

Great, If It Works

As I previously explained, the T-14 is remarkable for its armor (both active and passive systems), and its drivetrain. If reports are to be believed, the T-14 may very well be one of the nimblest tanks in existence.

When in dire situations, the tank can “boost” its engine from an output of 1,500 horsepower to an unheard of 2,000 horsepower, though this comes at a price. Engine longevity is significantly decreased after “boost” operation.

Technologically decisive platforms like the F-22 Raptor or the M60A2 tank are sometimes barred from being sold abroad. Apparently not so with the T-14.

In a somewhat surprising move, Manturov announced that several foreign buyers had expressed interest in acquiring the T-14 platform. “Next year, when serial supplies of these tanks to the defense ministry are launched and an exports certificate is obtained, we will begin to work with foreign clients,” he said, though he did end his statement with a rather weasel-word statement. “Preliminarily, bearing in mind that we cannot provide all the documentation to our foreign clients, well, we do have preliminary orders.”

Well, we’ll see about that.

Questions remain about what the T-14 in Syria were actually up to. It is possible that the T-14s in Syria did nothing more than collect dust—but hard to say definitively. Perhaps more information will come to light in the future.