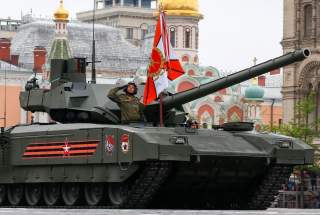 After many pronouncements, promises, and ever-moving production targets, the Russian Ground Forces may finally receive an initial batch of Armata Universal Combat Platform armored vehicles from the manufacturer, Uralvagonzavod, sometime in 2020.

Production of the T-14 Armata main battle tank, the T-15 heavy infantry fighting vehicle, and the T-16 tank recovery vehicle will supposedly start sometime this year. According to The Diplomat, Armata prototypes, including the T-14, T-15, and T-16 were undergoing trials last year in order to tease out any issues before entering serial production.

The centerpiece of the Armata family is the T-14 Main Battle Tank, equipped with a 125-millimeter smoothbore cannon, 12.7mm heavy machine gun, and a 7.62mm coaxial machine gun.

Experts praise the Armata family’s armor suite, especially that of the T-14, which features formidable overlapping active and passive protection measures, as well as the T-14’s automated loader, which reduces the number of crew needed to operate the tank. A high power/weight ratio, combined with the option of bursts of speed over short distances, make the T-14 superior—at least on paper—to anything in American or NATO inventories.

The Armata Universal Combat Platform family of vehicles was revealed in 2015 during Russia’s iconic Victory Day parade, in which the victory over Nazi Germany is celebrated annually.

Embarrassingly, one of the eight T-14s appeared to stall during the parade. After coming to a halt, and an unsuccessful attempt to tow the tank away, it managed to roll off of Red Square under its own power.

Red Square spectators were told by an announcer that “We have demonstrated how the evacuation of military hardware [during battle] will be conducted,” The Moscow Times reported. the newspaper further quoted the parade’s announcer as saying, “the tank’s stop was planned.” That the stop was planned however, is doubtful.

While innovative, the Armata Universal Combat Platform has reportedly been plagued with a host of design problems, ranging from engine and transmission complications, to issues with thermal sights. Importantly—it is expensive—and has not been battle-tested.

Combined with a slump in oil prices, which account for a significant percentage of Russia’s income, these issues may in part explain repeated serial production delays and moving production targets.

The Armata Platform manufacturer, UVZ, is apparently still on the hook for a contract signed with the Russian Ministry of Defense for “the production and delivery of 132 T-14 Armata MBTs, T-15 IFVs, and T-16 tank recovery vehicles,” according to a recent report from The Diplomat. “All 132 Armata platforms [are] to be delivered by 2022.” In theory, at least.

That seems rather optimistic however, especially considering the aforementioned technical problems. Still, once technical issues are sorted through, the Armata Universal Combat Platform may prove to be more than just a paper tiger.