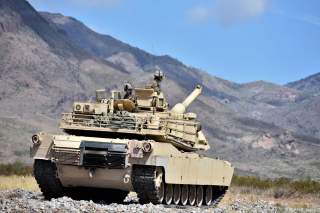 Key point: These two tanks are top-of-the-line and would give each other everything they've got.

While, quite naturally, the range and particular technical capabilities of the US Army’s emerging tank sights are not available for security reasons, several Russian news reports – such as GRU Pycckoe (site here) – report that the new Russian T-14 Armata’s thermal targeting sights are able to discern tank-size targets during the daytime at ranges out to 5 kilometers. The same reports state the nighttime sights can reach 3.5 kilometers.

Additionally, the 48-ton modern T-14 tank is widely reported to be able to reach speeds of 90-kilometers per hour; it is built with an unmanned turret, without a “fume extractor” and is designed for a 3-man crew surrounded by an armored capsule. While much has been made of the T-14 Armata’s cutting edge technology, including its active protection, 12-round per minute firing rage and 125mm smoothbore cannon in numerous public reports and assessments, it is not at all clear that the T-14 in any way fully outmatches current and future variants of the Abrams tank – at least according to available public information.

Nonetheless, while not discussed much by US tank developers, Abrams modernization efforts are without question being designed to meet and exceed any dangers posed by rival nation tanks, such as the T-14. Concerns about the threat posed by the T-14 Armata are, without question, informing US tank and weapons developers.

The Army is working on a new SEP v4 variant, slated to being testing in 2021, is being specifically engineered as a “lethality” upgrade to position the platform as the world’s most advanced and threatening main battle tank.

(Army officials of course explain that many of the details of the next-gen systems for the future tanks are not available for security reasons.)

A recent news report from Sputnik reported that tank-maker Uralvagonzavod has developed a "remotely-detonated" 125mm shell for the T-14 Armata.

The US Army’s Multi-Purpose 120mm tank round, to integrate onto the v4, is now being engineered to integrate several different kinds of ammunition into a single, tailorable round.

Without offering much detail, Army developers explain that the lethality upgrade, referred to as an Engineering Change Proposal, or ECP, is centered around the integration of a higher-tech 3rd generation FLIR – Forward Looking Infrared imaging sensor.

The advanced FLIR uses higher resolution and digital imaging along with an increased ability to detect enemy signatures at farther ranges through various obscurants such as rain, dust or fog, Army officials said. Further details are not available, developers say.

5 Best Submarines of All Time

5 Best Aircraft Carriers of All Time

5 Best Battleships of All Time

Worst Submarine of All Time

A report in Popular Mechanics earlier this year, by Kyle Mizokami, says the T-14s new, now-in-development 3UBK21 Sprinter missile can hit ranges more than 7 miles, basically tripling the current 2.48-mile range of an Abrams 120mm round, according to the report. The Armata’s current round, the 9M119 Reflecks, has a range of 3.1 miles (roughly comparable to the current Abrams) and can penetrate up to 900 millimeters of armor, Popular Mechanics writes.​

It goes without saying that the lethality of a round is, by any assessment, contingent upon the range, accuracy and fidelity of the sensors and targeting technology in place to provide guidance; accordingly, exact range of fire may be far less important than the range and relative resolution of on-board sights and sensors.

Furthermore, not only will the Abrams v4 improve range and lethality of the tanks main gun, but it will also bring long-range laser detection and rear-view sensors. Also, newly configured meteorological sensors will better enable Abrams tanks to anticipate and adapt to changing weather or combat conditions more quickly, Army officials said.

“Meteorological sensors are being integrated into the fire control system. It provides information into fire control algorithms that help increase the accuracy and precision of your weapon system,” Ashley Givens, spokeswoman for the Army’s Program Executive Office Ground Combat Systems, told Warrior Maven in a written statement last year.

The maturation and efficacy of active protection systems also bears prominently upon this calculus; the Army is now accelerating development of a handful of APS systems to better enable tanks and other armored vehicles to detect, track, intercept and destroy incoming enemy RPGs, tank rounds and anti-tank guided missiles. The Army is now integrating an APS system called Trophy onto its Abrams vehicles.

Abrams-maker General Dynamics Land Systems is already on contract to build 45 of the M1A2 SEP v3 tanks for the US Army.

The v3 is built to lay the ground work for subsequent v4 variants in a number of key respects. On board command and control, force tracking technology, power generation and sensors are, as is regularly the case with today’s new acquisition strategies, incorporate a common set of standards known as “open architecture.” This approach is intended to engineer hardware and software in a way that enables it to quickly integrate and merge with new technologies as they emerge.

Alongside these efforts, the v3 is also built with a specific “protection” or survivability flexibility to afford commanders an opportunity to tailor the tank’s protection level to adapt to whatever threat the combat circumstance may merit.

The Army is now seeking to finesse a careful and combat relevant balance between upgrading the current Abrams to the maximum degree while also recognizing limitations and begin conceptual work on a new platform called Next-Generation Combat Vehicle.

While the Army is only now in the early stages of concept development for this technology, service weapons developers did tell Warrior that it may indeed evolve into a family of vehicles. Many reports and Army comments have indicated that the configuration of the new vehicles may resemble hull forms of an Abrams, Mobile Protected Firepower vehicle, Bradley or even elements of a Stryker vehicle. However, it is without question that, whatever NGCV evolves into, it will be built to consistently accommodate the best emerging technologies available.

For instance, Army weapons developers explained that some early developmental work assessing lighter weight armor and hull materials able to provide the same protection as the current vehicle at a much lower weight.

Key parameters for the NGCV will, among other things, include building a lighter-weight, more mobile and deployable vehicle. Weight, speed and mobility characteristics are deemed essential for a tank’s ability to support infantry units, mechanized armored units and dismounted soldiers by virtue of being able to cross bridges, rigorous terrain and other combat areas less accessible to existing 70-ton Abrams tanks.

Army program developers say specific cross-functional team leads have begun to explore concepts and early requirements for the NGCV effort to, among other things, look for common, cross-fleet technologies and build in flexibility.

One possibility now receiving some attention, Army senior leaders say, is that the NGCV may implement a lightweight 120mm cannon previously developed for one of the Manned-Ground Vehicles developed for the now-cancelled Future Combat Systems program. The vehicle, called the Mounted Combat System, was built with a two-ton 120mm cannon roughly one-half the weight of the current Abrams cannon.