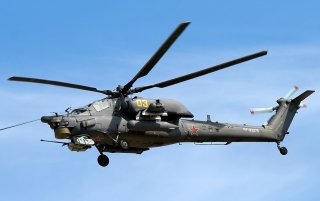 The latest iteration of the Soviet-era Mil Mi-28 attack helicopter, the upcoming Mi-28NM is packed with cutting-edge features and design concepts. In a lengthy interview with Russian state news outlet TASS, the project’s lead designer Vitaly Shcherbina said the Mi-28NM will revolutionize Russia’s heavy attack helicopter roster: “We can say that the Mi-28NM is quite a different helicopter both by the ideology of its employment and the technologies integrated into its design, and it can be rightly called a next-generation or breakthrough helicopter compared to the baseline version,” he noted.

As with Russia’s other aircraft modernization projects, the Mi-28NM brings a revamped, networked communications suite: “The onboard communications and telecoms system offers a possibility for the helicopters to interact in a group, operate in air and ground communications networks, implementing the network-centric methods of weapons’ control on the battlefield, i.e. to get information on the enemy and friendly forces in a secure jam-resistant mode timely and without delays,” Shcherbina said.

The Mi-28NM will likewise feature an improved fuselage design, new engines, and a slew of weapons upgrades. The latter is particularly noteworthy, as the new helicopter will be able to launch and direct combat drones. “The inclusion of kamikaze drones in the gunship’s airborne armament is one of the areas of interaction between Mi-28NMs and UAVs [unmanned aerial vehicles],” Shcherbina said. “Upon detecting enemy targets, the helicopter’s crew issues target acquisition and exercises control of their destruction.” Shcherbina added that the helicopter will be compatible with other types of drones, including those suited for reconnaissance and surveillance missions. The Luch Korsar and Forpost-R are among those drones confirmed to work with the Mi-28NM, being able to coordinate directly between themselves as well as through a shared army command post.

Despite the designer’s heavy focus on drone integration, the Mi-28NM does not skimp on more traditional weapons. The helicopter will boast a hefty arsenal of next-generation stand-off missiles, bombs, and rockets, according to Shcherbina. The Mi-28NM will also be armed with “new multi-functional missiles” that will be able to interface with the helicopter’s attached drones for increased lethality, though details remain scant. “The comprehensive use of this missile together with the sources of information on the enemy and the combat environment in the designated area will allow the crew to deal with the issues of optimizing the characteristics of a flight to the area of combat employment in real-time, namely to choose the parameters of launching an attack on a target (the path, speed and altitude of the helicopter’s flight and the level of firing a missile) in the automated mode,” Shcherbina added.

The Mi-28NM made its maiden flight in late 2016 and underwent state trials for the past several years. The helicopter is reportedly in serial production, with 98 Mi-28NM models slated for delivery to the Russian military during the 2020–2027 budget cycle. TASS confirmed earlier that Russia’s current fleet of baseline Mi-28 helicopters will be eligible to receive the Mi-28NM upgrade package.