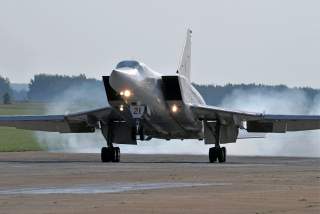 The National Interest previously reported that the Russian Air Force (VKS) is preparing the Tu-22M3M strategic bomber for its maiden flight, to be held by the end of this year.

The Kremlin’s Defense Deputy Minister Alexei Krivoruchko, who inspected the Tu-22M3M earlier this month, expressed optimism about the Tu-22M3M’s production progress: “undoubtedly, serial production of the Tu-22M3M will take place in the near future. We await the first flight, the conclusion of all engineering work, and will then make a decision about serial deliveries.”

Several days later on December 28, the manufacturer Tupolev’s press office announced that the flight had taken place: “The first flight of the deeply modernized strategic bomber Tu-22M3M was held on the aerodrome of the Kazan Aircraft Association Production, Tupolev branch… the flight was at an altitude of 1,500 meters and lasted 37 minutes. All tests concerning the verification of new onboard systems and equipment, installed in the context of extensive modernization, were completed during the flight. The flight team’s data shows that the flight proceeded as planned, systems and equipment were used without issue.”

The announcement goes on to list some of the Tu-22M3M’s previously reported features and improvements, including a digitized onboard interface, a new electronically scanned radar array, navigation system improvements, and new electronic countermeasure (ECM) tools.

The manufacturer confirmed that onboard system modernization was a major design priority for the Tu-22M3M. They state that as much as 80% of the plane’s avionics have been replaced, which they claim will “increase navigation accuracy and the level of automated operation, also simplifying its maintenance process and pre-flight setup routine.” The statement reiterated that this is part of a broader effort, beginning with the Tu-160M2 “Blackjack,” to implement a standardized avionics suite across all of its upcoming Russian military aircraft.

The Tu-22M3M’s other hardware change beyond upgraded electronics is a more formidable armaments suite, particularly through improved integration of Russia’s new Kh-32 missiles. Though an iteration of the earlier Kh-22 anti-ship missile, Russian military expert Dmitry Kornev notes that the Kh-32 missile system was developed to also be effective against enemy infrastructure like bridges and power plants.

The Tu-22M3M’s most notable weapons change is its compatibility with nuclear-capable Kinzhal warheads, but what that means depends on several external factors. The Tu-22M3M’s strategic purpose, and legal classification under the 2010 New START Treaty, hinges on its much-discussed aerial refuelling capability. As Kornev put it to Russian news outlet RT, “If the plane is capable of aerial refueling, that decisively changes its role in long-range aviation. With aerial refueling, it becomes an intercontinental, hypersonic heavy strategic bomber.”

Given what we currently know of its specifications, the Tu-22M3M stands the serious risk of being classified as an  “undeclared heavy bomber” under the New START Treaty provisions. This is a label that carries potential repercussions for Russia’s overall compliance with the treaty, and one that the Kremlin fought tooth and nail to avoid for the previous Tu-22M and Tu-22M3.

The Chairman of Russia’s Federation Council Defense and Security Committee, Viktor Bondarev, maintains that all of the Tu-22M-series planes are currently in full compliance with New START. As New START’s fate continues to hang in the balance, Bondarev likely implied Kinzhal implementation in his warning that US withdrawal from the treaty would free the VKS to arm the 22M-series bombers with “more modern weaponry.”

New START will expire in 2021 unless renewed, the same year that the Tu-22M3M is scheduled to enter into service.