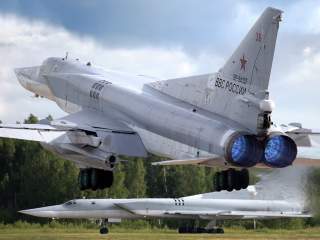 In the latest sign that Russia’s much-anticipated Tu-22M3M (NATO reporting name “Backfire”) is inching closer to serial production readiness, the the Kremlin’s Defense deputy minister Alexei Krivoruchko told Russian state news that the the strategic bomber will have its maiden flight by the end of this year: “The plane is already practically ready for flight. The [plane’s] first flight will take place by the end of the year. We are satisfied with the results [of the trials].”

Krivoruchko gave this statement on the day of a late December inspection of the Tu-22M3M’s manufacturer factory in Kazan, Tatarstan, which he says proceeded smoothly: “Today, we saw the main thing that we came to inspect-- development of the Tu-22M3M.”

From 1960’s to mid 80’s, the Soviet military fleet ballooned to comprise dozens of flagship aircraft, many with multiple variants. But the Soviet collapse ushered in a decade-long period of paltry investment and poor maintenance, causing large swathes of the Russian fleet to fall into disrepair.

Kremlin has since been faced with the peculiar challenge of how to sustainably and cost-effectively modernize its fleet: Which models should they retire, and which should they continue to support? Where should they iterate present systems, and where should they invest in total redesigns?

No plane better illustrates this dilemma than the Tu-22, which has undergone countless revisions and iterations since its production in the 1960’s. The original Tu-22 had to be rapidly replaced due to significant maintenance and quality control issues, leading to the creation of the much more reliable Tu-22M that was based on a completely different design but was sold to the Kremlin as a Tu-22 derivative for convoluted bureaucratic reasons.

The subsequent Tu-22M3 was much more of an iterative upgrade, retaining the Tu-22M’s design philosophy while implementing minor nose and wing alterations along with a more powerful NK-25 engine. The Tu-22M3 has remained the latest Backfire model through the Soviet collapse, but it is becoming dated in the age of modern electronic warfare and sophisticated radar systems.

The Kremlin, again faced with the choice between iteration and redesign, opted for something of a halfway solution: it will retain its predecessor’s design, but replace almost all of its avionics (onboard aircraft electronics). As one defense industry insider told Russian state news, “The Tu-22M3M will feature an absolutely new avionics system standardized with the Tu-160M2.” The changes include GLONASS navigation system integration, a digital onboard interface, and electronic warfare countermeasures (ECM).

The Tu-22M3M’s other major change is its expanded armament suite, notably including an upgrade to Russia’s new Kh-32 anti-ship missiles over the Kh-22 missiles of its predecessor. Aside from a significantly greater effective range and faster speed, the Kh-32 features additional protection against jamming in the form of integrated inertial navigation system. It is also thought to include aerial refueling functionality, though this has yet to be confirmed.

Filling a familiar chassis with new technical guts has been Russia’s go-to strategy for the modernization of its fleet, apparent across a wide range of upcoming Russian aircraft from the A-50U reconnaissance plane to the Tu-160M2 bomber.

This approach reflects Russian confidence in the continuing viability and relevance of certain Soviet-Era aircraft designs, a bet that can expedite development cycles and save R&D costs over the short term.