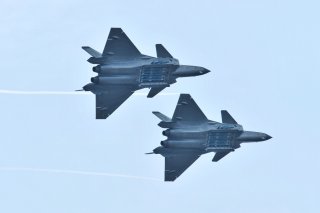 As China revs up production of its fifth-generation J-20 aircraft, both a single-seat and a two-seat variant of the aircraft may be built—if photos of a two-seat J-20 published in a Chinese newspaper are any guide.

Explaining that the new two-seat J-20 will likely be referred to as the J-20B, J-20AS, or J-20S, a report in the Drive says that pictures of a two-seat “tandem cockpit” J-20 in yellow primer paint emerged from Chengdu Aerospace Corporation’s plant and flight test airfield.

What does this mean? Could it be a fifth-generation, stealthy version of the F-14 Tomcat? Maybe. However, unlike the famous Tomcat, which emerged prior to the large-scale explosion of artificial intelligence-enabled computing, a fifth-generation fighter carrying a two-man crew raises some interesting questions and dynamics.

At the beginning of 2021, the Global Times newspaper quoted unnamed military analysts who cited the merits of a two-seat J-20. “The twin-seat variation of the J-20 could be used for electronic warfare, command of wingman drones or bombing, and the domestic engine means the J-20 is no longer reliant on Russian engines,” the Global Times stated.

The addition of a second seat to the J-20 stealth fighter presents some interesting questions, as it does potentially add new decision-making variables to air combat, such as drone coordination, electronic warfare, or intelligence analysis.

Should connectivity be lost in a combat situation, command and control could at least temporarily disappear, creating a circumstance wherein having an extra set of human eyes, observational faculties, and decision-making capabilities could bring a meaningful tactical advantage. While human eyes might not necessarily see any better than advanced cameras, another person might allow for more effective intelligence analysis.

Should the main pilot be engaged in pressing combat tasks, perhaps a second pilot could oversee the operation of nearby drones, analyze an interwoven tapestry of threat information, or coordinate with nearby air and ground assets.