Food Prices Will Increase as the War in Ukraine Drags On 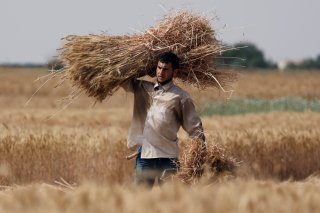 Both Russia and the United States must work to find a compromise solution and end the war in Ukraine. In the meantime, programs to export foodstuffs and fertilizers from Black Sea ports should be increased to minimize the declines in the quality of life, starvation, mass migration, and death that the conflict will inevitably spawn.

The war in Ukraine is having a disastrous effect on the global production, distribution, and access to food. For this reason, we must work to end it as soon as possible.

Meanwhile, in order to minimize the hunger and mass displacement damage already caused by the war, and declines in the quality of life, starvation, mass migration, and death that are likely in the near future, international organizations like the UN should expand their programs to export foodstuffs and fertilizers from Black Sea ports.

Prior to the Russian invasion of Ukraine in February, food prices were already rising due to Covid-19-related supply chain issues and spiking inflation, especially in transport and fuel costs. Since January 2021, when the effects of the pandemic really set in, the EU natural gas spot price has risen 970 percent. Gas flow from Russia remains restricted due to sanctions, and other sources cannot be brought online quickly, indicating that higher prices are likely to persist for some time.

Moreover, since natural gas represents 75 percent of the cost of ammonia—the cheapest and most effective fertilizer and the basis for more complex compounds—fertilizer prices have more than doubled. Many fertilizer plants worldwide have reduced output or shut down due to high gas and electricity costs. The ensuing decrease in supply will cause prices to rise further. Farmers will have to choose between passing increased fertilizer costs onto consumers or using less, which will lead to lower yields, less food, and thus higher prices. Either way, the cost of food will rise.

Food prices, even after adjusting for inflation as shown in the graph below, are now significantly higher than they were at the height of the Arab Spring in 2011–13, when food shortages, political instability, and war in the Middle East and North Africa (MENA) caused hundreds of thousands of deaths and millions to be internally displaced or flee the region entirely. 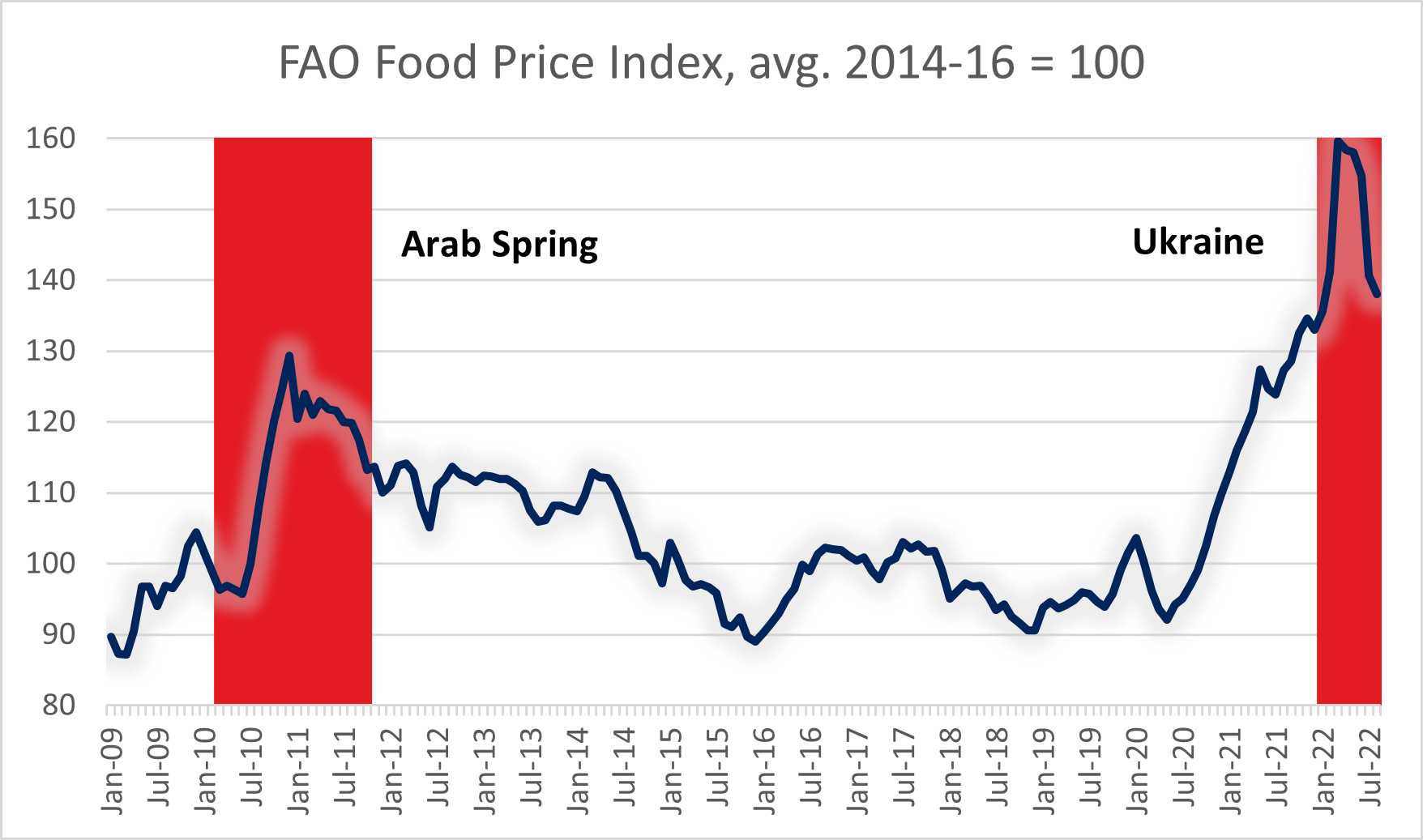 The recent UN program allowing some grain shipments through the Black Sea has been beneficial in easing food prices. However, as the program is limited, with just 166 shiploads carrying 3.7 million tons inspected and cleared to date, far short of the 60 million tons that are typical for a season, food prices remain very high.

While expanding the UN program would do much to combat hunger, particularly in the MENA region, which is traditionally a huge buyer of Russian and Ukrainian grain, there are obstacles. First, European farmers have hiked prices due to the sky-high electricity, natural gas, and diesel input prices that they face. Since Ukraine has lower input prices and does not have to pay for strict EU environmental regulations, removal of tariffs and quotas has allowed Ukraine to undercut European farmers. The obvious solution is to direct more grain to MENA, not the EU. Lower food prices would help all the people of Europe and hurt only a small group, farmers. This could be politically appealing to some leaders.

Russia has complained that only a small percentage of exports has been to the intended MENA customers, and too much has been to “unfriendly” countries, like those in the EU. In the absence of progress on negotiations with NATO, Russia could end the program. A better idea would be to send more grain to the MENA region. 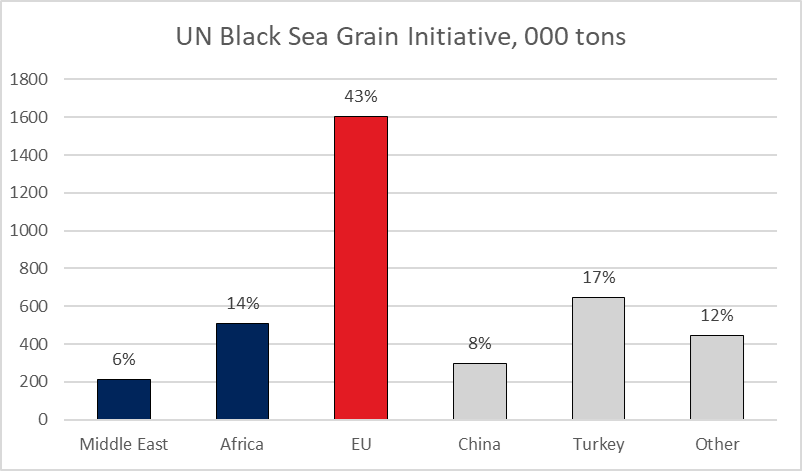 The United States has condemned Turkey’s support of Azerbaijan in its conflict with Armenia. Ankara, meanwhile, has expressed dismay over U.S. pressure to toe the sanctions line against Russia, which is a source of considerable trade and tourism revenue. In a possible limited concession, two large Turkish banks have stopped processing Russia’s Mir credit cards. Washington would be wise to negotiate a mutually acceptable deal. Otherwise, Turkey could curtail or end the UN program, preferring to maintain substantial economic ties with Russia and political support of Azerbaijan.

EU leaders would be taking the most logical course of action if they worked toward ending the conflict. Otherwise, Europeans will pay much higher prices for food, on top of massive increases in gas and electricity costs, resulting in declining living standards and, in some cases, death. Riots and large-scale unrest are possible. Europe should also expect a new influx of refugees from MENA, perhaps even more than arrived during the Arab Spring, in addition to the six million Ukrainian refugees it currently hosts. European leaders must convince the United States to stop fueling the conflict, however difficult that may be.

The United States has an ample supply of natural gas, which means its prices for electricity, fertilizer, and food will be lower than in Europe. But inflation will probably be high nonetheless, although it remains to be seen whether higher prices will create strong public opposition to U.S. policy on Russia.

Neither Europe nor the United States is moving urgently enough toward ending the conflict. The EU’s top foreign policy official said back in April that the war “must be won on the battlefield” and urged pouring more weapons and money into the conflict. In Washington, the White House and Congress are focused primarily on increasing military and other aid to Ukraine rather than finding a way to end the war.

The UN must also make more of an effort in brokering an end to the fighting. Despite talk at last week’s General Assembly about ending the war, there has been little action. But surely ending this conflict and increasing food, fuel, and fertilizer exports from the Black Sea is entirely consistent with the UN’s mission.

Many Western politicians appear to believe that because the war in Ukraine represents a legitimate fight for fundamental rights, democracy, and freedom, the pain is worth it. But most people in Europe and around the world would surely prefer not starving or freezing to death, over lofty political ideals. “Who controls the food supply controls the people,” famously quipped Henry Kissinger. To use food as a weapon, especially against third parties that are not involved in the conflict, is particularly cruel and immoral.

Editor's note: The UN data was updated for the grain shipments leaving through the Black Sea as of October 3, 2022.