Force Design 2030 Gets the Marines Ready for the Next War 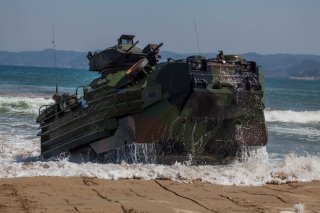 The U.S. Marine Corps’ force structure plan, Force Design 2030, is an adaptable text written with the understanding that threat variables and weapons technologies will evolve and affect manpower organization. However, the plan represents a clear shift in thinking for the Corps as it anticipates future operations will be amphibious, multi-domain, and occurring over vast expanses of water. Since the Corps will be returning to its traditional maritime infantry role, Force Design 2030 calls for a massive reduction in Abrams tanks, heavy helicopters, and other large mechanized platforms and weapons systems. Instead, the plan favors unit mobility, lethal anti-armor weapons, and drones.

An influential member of Congress working closely with the Navy and Marines on strategy and near-term innovation and weapons production praised the Corps’ adaptive approach in an interview with The National Interest. Rep. Rob Wittman (R-VA), the ranking member of the Seapower and Projection Forces Subcommittee, explained that while the text does greatly reduce the number of heavy platforms to fit an agile expeditionary force, it still maintains a key measure of heavier weapons for combined arms operations. Wittman is encouraged that the document reflects a sophisticated understanding of how weapons, tactics, and concepts of operation will need to adapt and evolve in the coming years.

“I think Force Design 2030 is exactly the course that needs to be pursued by the Marine Corps. They’re looking at a very complex environment where they have to move around, they have to be able to create uncertainty, they have to do a lot of things with a lot of different platforms. And I know some folks have pushed back and said, ‘Gosh, you can’t get rid of M1 Abrams, tanks, you can’t get rid of 155s.’ … And if you look at the most recent machinations of adjustments to the plan, they are indeed keeping certain elements of that combined arms force today, but they also know that they have to be adaptive, flexible, and mobile,” Wittman said.

New software upgrades to improve the range, accuracy, and targeting ability of ground, air, and surface-fired missiles are expected in the future. These developments will necessarily require adjustments to maritime warfare tactics. Advances in artificial intelligence (AI) will enable drones and sensors to analyze and distribute incoming targeting data more quickly across a multi-domain force. This means that smaller and lighter mobile anti-armor, anti-drone, and helicopter air defenses can better organize threat data and shorten sensor-to-shooter time. Force Design 2030 explained this concept well, stating that such an approach will “create the virtues of mass without the vulnerabilities of concentration, thanks to mobile and low-signature sensors and weapons.”

“The Marine Corps is adapting this plan to look at what we need to do based on current world situations. That’s a great thing about the plan. You know, I’ve had some folks that have pushed back and said, ‘Oh, gosh, we can’t do this, or we can’t do that.’ And I said, ‘Well, think about it: The Marine Corps is testing these concepts vigorously. They come back each year and make adjustments to it. They make adjustments to the number of V-22s, Abrams tanks, Paladins, the 155s. That’s exactly what you need to do.’ … You can’t say, ‘Well, we’re going to plug in what we need in 2030,’ you have to say, ’We’re going to experiment and develop where we need to be in 2030.’ We’re going to learn on the run, and the Marine Corps is doing that,” Wittman explained.