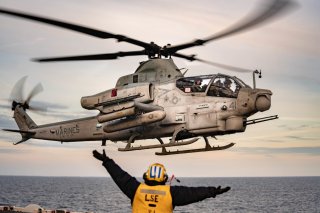 In an effort to align with the Marine Corps’ Force Design 2030 objectives, Air Control Group 28 will assume command of three Marine Wing Support Squadrons assigned to the 2nd Marine Aircraft Wing. The aim of the move is to enhance capabilities and modernize the force.

“We have significantly diversified the composition of the group in terms of the [military occupational specialties] that are now resident here, and the missions that we are going to be expected to execute,” said Co. Michael McCarthy, the MACG-28 commanding officer, in a Marine Corps press release. “Frankly, this is the biggest change this group has seen in its command relationships and command organization in its 79-year history, so this is a really big deal for us,” McCarthy continued.

Additionally, the Marine Corps statement explained that the consolidation will “enhance unity of command … and sustain relationships between Marine Aircraft Groups and the geographically co-located [Marine Wing Support Squadron] units.”

The statement added that Marine Wing Support Squadrons and “geographically co-located Marine air command and control system units will also implement mutual-support relationships that will allow both unit types to capitalize on the unique command-and-control and enabler capabilities of the other.” According to the Marines, the force realignment “unites aviation command and control and ground support functions under a single group headquarters within” the 2nd Marine Aircraft Wing.

Marine Air Control Group 28 will now consist of a total of “three MWSS, three aviation command-and-control squadrons, a low-altitude air-defense battalion, and a communication squadron.” The Marine Corps also noted that the move will “enhance operational design” in the Indo-Pacific, an area on which the Marine Corps is laser-focused.

As a part of Force Design 2030, the Marine Corps is in the midst of the most significant institutional change it has gone through since World War II. Rather than acting as a second land army optimized for the grinding land campaigns that defined the Marine Corps’ involvement in the Middle East, the Corps is shifting gears toward a maritime environment in the Indo-Pacific region.

Even with the change in environment, the Marine Corps will still leverage its own organic aviation assets to support Marines on the ground. Marine Air Control Group 28’s organizational reformation will help support that effort.

“It’s an exciting time for all the aviation expeditionary enablers internal to MACG-28, and we’re excited to get after this on behalf of the [commanding general] and continue to provide world-class air command-and-control support and world-class aviation-ground support to ‘America’s Airwing,’” said Colonel McCarthy.