The U.S. Marine Corps Will Stop at Nothing to Defeat the Chinese Navy 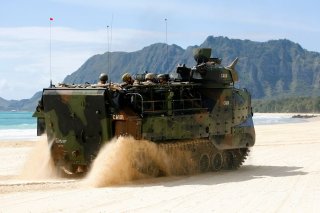 The United States Marine Corps (USMC) is undergoing some of the most significant changes in a century.

The United States’ force-in-readiness is pulling out all the stops to get rid of things it does not need, rapidly field new state-of-the-art capabilities, and restructure itself to defeat the largest navy in the world, China’s People’s Liberation Army Navy.

The Corps is working to meet Force Design 2030, a USMC guiding document that will radically transform the Marine Corps and move it away from a land-first force, returning instead to the Corps’ naval heritage.

As a part of that shift, the Marine Corps is redesignating some of its Marine regiments, thinning numbers into a leaner, more agile force called Marine Littoral Regiments.

During a redesignation ceremony for the newly-named 3rd Marine Littoral Regiment, the deputy commandant of the Marine Corps, General Eric Smith, spoke about the move's significance. “This capability is absolutely necessary to be able to compete, deter, and defeat an adversary or peer competitor,” General Smith explained.

“We’re equipping training and organizing them so they’re able to deploy tonight – and I mean tonight – to do what they need to do … We owe the combatant commander the capability now…to deter and change the trajectory of the adversary. We can’t wait until the adversary reaches their full potential, we have to change that trajectory now,” General Smith added.

It is not just a force restructure that the Corps is after. It has also divested a tremendous amount of equipment, unofficially adopting the mantra that if it doesn’t swim, it sinks.

To that end, the Marine Corps has divested all of its tank battalions as well as a large part of its artillery and tube mortar pieces. The USMC is also getting rid of the 1970s-era Amphibious Assault Vehicle and replacing it with the newer Amphibious Combat Vehicle.

Though the Marine Corps has embraced the raft of new changes in force structure, personnel, and equipment, not everyone outside the Corps has been entirely on-board.

The Corps’ top Marine, Commandant of the Marine Corps General David Burger, urged Congress to help the Marine Corps help themselves in fulfilling Force Design 2030 during an online event hosted by the Center for a New American Security.

“I think this is the deciding point where, in the [Pentagon] and in Congress, are they willing to back an organization… that is willing to accept risk, willing to move at speed, willing to discard legacy things, learn as fast as we can — are they going to support and enable that to occur or not?” the general asked.

He added that “if they don’t, then you’re in a bad place because you’ve already gotten rid of, you’ve already divested of, you shed the things you don’t think you need for the future. But the other things are coming, and if you’re left in a lurch there, that’s not a good place to be.”