The Marine Corps’ Amphibious Combat Vehicle Is Back in the Water 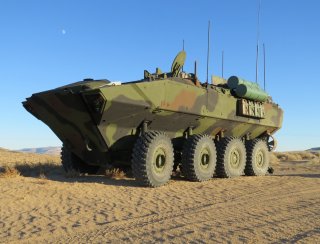 According to information from the U.S. Navy’s Proceedings podcast, the ACV’s tow cable, used by the ACV to tow other ACVs through the water, lacked elasticity and was prone to snap under load rather than stretch.

“The safety of our Marines and Sailors is a top priority, especially as we continue to test the capabilities of the newest Marine Corps platform,” said Rear Adm. Wayne Baze, commander of Expeditionary Strike Group (ESG) 3, explained in a Navy statement. “The Sailors and Marines involved have received extensive training on operation of the craft, providing the Navy and Marine Corps team the opportunity to rehearse together for real-world events.”

The Marine Corps explains that the ACV is “an eight-wheel drive, armored vehicle with open-ocean capabilities and land mobility. It’s a unique combination of previously-fielded amphibious vehicles and new technological advances to the fleet’s capabilities.”

The ACV is one of the Marine Corps’ most significant acquisitions in several decades and replaces the 1970s-era Assault Amphibious Vehicle (AAV). While both the new ACV and legacy AAV are amphibious, the ACV’s “ability to use the ocean and waterways to carry Marines and equipment provides expeditionary readiness to Marines on the move, wherever their mission takes them, across a variety of operating environments,” and is thought to be a more survivable, capable platform.

Still, the ACV has sustained criticism for its swim speed, which is roughly the same as the Cold War-era AAV, despite the ACV’s modern design.

Although the ACV’s release from land-only operations is a boon for the U.S. force-in-readiness, the AAV is limited to the land only. Last year, an AAV sank off the California coast during a routine training exercise. The mishap cost twelve marines and a sailor their lives. The Marine Corps mandated a pause in aquatic operations to prevent a repeat catastrophe out of an abundance of caution.

“As we strengthen naval warfighting as a force and pivot to operating in a contested littoral environment, conducting safe, realistic training on this platform advances our ability to respond swiftly to global threats in austere maritime conditions,” Maj. Gen. Roger B. Turner, the commanding general of the 1st Marine Division, explained. “The Amphibious Combat Vehicle is purpose-built to provide expeditionary lethality for Marines on the move.”

Now that the Amphibious Combat Vehicle is again allowed in the water, the Marine Corps can continue to perfect their specialty: expeditionary amphibious assault.