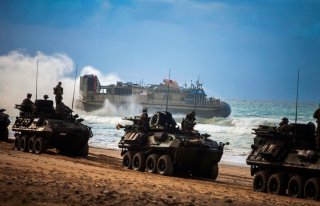 Here's What You Need to Remember: The new Corps ACV is also built to align with the U.S. Navy’s strategic and conceptual shift toward an increased “sea-basing” focus. Smaller multi-mission vessels, according to this emerging strategy, will be fortified by larger amphibious assault ships operating at safer distances.

The new U.S. Marine Corps Amphibious Combat Vehicle is now entering full-rate production as part of a Corps effort to acquire as many as seventy-two vehicles by early 2021, a BAE Systems announcement said.

The vehicle, which became operational earlier this year, is engineered to swim from ship-to-shore for deeper-in land attacks, enabled by a precision weapons station, V-shaped hull for underneath blast deflection and an ability to operate at 55mph speeds comparable to an Abrams tank. The ACV is powered by a 700hp engine and armed with an unmanned turret able to fire a 30mm or 40mm cannon. The new ACV is also built with a specific mind to dispersed, or disaggregated operations made possible by a 200-gallon fuel tank, enough for a 365-mile mission.

Longer-range mission capability, fortified by advanced weapons systems, allows for deeper-in land attacks as the new ACV is designed to fight its way forward through enemy fortifications once an initial beachhead is secured. It also clearly seems designed to optimize or fully leverage newer methods of hardened networking essential for more dispersed formations. This lowers the risk from enemy fire by virtue of not advancing in a more condensed fashion. The vehicle can travel thirteen miles through water at speeds up to six knots traveling from ship to shore.

If amphibious incursions occur in narrow, more spread-apart scenarios, landing forces will potentially need to engage in more land-fighting without large numbers of forces nearby. They will likely rely more upon air support, long-range fires and “networked” intelligence from other surveillance nodes. This evolving strategic approach is likely informed by the existence of the F-35B, a fifth-generation aircraft in part to provide air support for amphibious attack. The presence of an F-35 expands the realm of possibility related to the scope of amphibious assault by increasing its reach and greatly strengthening an ACV’s ability to fight through enemy defenses once ashore.

The new Corps ACV is also built to align with the U.S. Navy’s strategic and conceptual shift toward an increased “sea-basing” focus. Smaller multi-mission vessels, according to this emerging strategy, will be fortified by larger amphibious assault ships operating at safer distances. Navy leaders have said these ships would operate as “seaports, hospitals, logistics warehouses and sea-bases for maneuver forces,” and therefore able to dispatch and operate ACVs advancing toward an amphibious landing assault.

Last year, the Marine Corps’ fire live ammunition at the ACV to assess its ability to withstand major warfare enemy land attacks. The exercises sought to test the longevity, durability and overall defensive toughness of the vehicle by firing weapons at it to the point of “total destruction,” developers explained.

Kris Osborn is Defense Editor for the National Interest. Osborn previously served at the Pentagon as a Highly Qualified Expert with the Office of the Assistant Secretary of the Army—Acquisition, Logistics & Technology. Osborn has also worked as an anchor and on-air military specialist at national TV networks. He has appeared as a guest military expert on Fox News, MSNBC, The Military Channel, and The History Channel. He also has a Masters Degree in Comparative Literature from Columbia University. This article first appeared last year.