Why the U.S. Marines Rave about Their New Amphibious Combat Vehicles 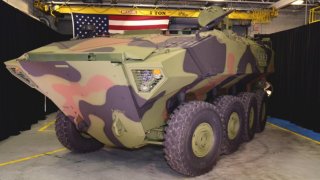 Here's What You Need to Remember: The Marines are finally able to replace their aging Amphibious Assault Vehicles with a new, higher-tech version.

The new vehicle is engineered to swim from ship to shore bringing advanced weapons, new sensors and “deeper, stronger,” land attack possibilities. As part of this strategic and tactical emphasis, the new ACV is built with new survivability technology such as a precision weapons station, v-shaped hull and “swim” capability enabling it to operate within the “littorals and beyond,” Corps officials say. Also, a Marine Corps statement said the new ACV can keep pace in terms of mobility and maneuver with an Abrams tank.

The new vehicle weighs 30-tons and has a digitized driver’s instrument panel. The existing new ACVs are armed with .50-Cal machine guns and engineered with an unmanned turret that can integrate a 30mm or 40mm cannon, should the Corps request that. It also makes use of a stronger 700hp engine, compared to the AAVs 400hp engine.

The new vehicle configuration is aligned with an emerging Navy-Marine Corps amphibious assault strategy which, among other things, sees a possible need for “dispersed,” extended penetration into land defenses after an initial beachhead is taken. To in part enable this, the new vehicle is also faster; it uses ocean water to cool the engine so as to enable it to carry up to 200 gallons of fuel—enough for a 365-mile mission.

While the new ACV can travel roughly thirteen miles through water, at about six knots, from ship to shore, it can hit speeds of 60mph on land for hundreds of miles inland. If amphibious incursions occur in narrow, more spread-apart scenarios, landing forces will potentially need to engage in more land-fighting without large numbers of forces nearby. They will likely rely more upon air support, long-range fires and “networked” intelligence from other surveillance nodes. They will also need command and control ships or elements of the force to find and exploit landing areas most advantageous to the attacking force. Deeper amphibious vehicle land attack is intended to leverage more fully integrated coordination with ship-based fire support; this integration will help the new ACV achieve its goal of achieving deeper, more lethal and survivable land attack operations.

BAE’s new ACV is also built to align with the Corps’ strategic and conceptual shift toward an increased “sea-basing” focus. Smaller multi-mission vessels, according to this emerging strategy, will be fortified by larger amphibious assault ships operating as sovereign entities at safer distances. Coffman said these ships would operate as “seaports, hospitals, logistics warehouses and sea-bases for maneuver forces.”

Not long ago, the Marine Corps’ conducted offensive and defensive live-fire exercises with its emerging Amphibious Combat Vehicle, intended to refine the new vehicle’s weapons systems and survivability—while aligning the modern vehicle with the service’s evolving amphibious warfare strategy.

The combat exercises include firing live weapons at targets from the vehicle, while also testing the Amphibious Combat Vehicle’s ability to withstand enemy fire. To assess survivability, Corps live fire plans attacked the ACV with enemy weapons until the attacks achieved “total destruction,” to prepare the vehicle for long-range, high-intensity amphibious land-attack missions.