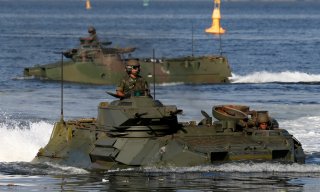 The Marine Corps is revving up production and acquisition of its new deep-attack Amphibious Combat Vehicle engineered to travel from ship-to-shore before advancing across a beachhead into enemy territory for land operations.

“The plan for the ACV is to increase the buy from 72 to 92 vehicles in FY 22 . . . and so the tank divestiture is a piece of that,” Deputy Assistant Secretary of the Navy for Budget Rear Adm. John Gumbleton told reporters, according to a Pentagon transcript.

The ACV, in development for several years, is replacing the existing Corps AAV and configured

with 8 x 8 wheels for greater speed, maneuverability, and survivability on land. As a tracked vehicle, the legacy AAV is not as mobile for land attack, and the new ACV is engineered for long-range sea-land attack operations.

The ACV can travel roughly thirteen miles through the water at speeds up to six knots and reach 60 miles per hour on land for hundreds of miles inland. The wheeled configuration of the ACV removes torsion bars, a design feature which can add new possibilities such as the addition of a V-shaped hull. The ACV is able to carry up to 200 gallons of fuel for a 365-mile mission and weighs 30 tons. It is built with a digitized drivers instrument panel, unmanned turret able to integrate a 30-millimeter gun and 700 horsepower engine, more powerful than the AAVs 400 horsepower engine. The ACV uses ocean water to cool the engine and is armed with a .50-Cal machine gun.

The plus-up in ACV numbers is quite significant as well, as it appears to align with the Marine

Added cross-domain functionality not only means air-power coordination but a commensurate ability to advance and fight on land, which appears to be part of the reason the Marine Corps is both looking for larger numbers of ACVs and also building them for more extended land assault. If amphibious incursions occur in narrow, more spread-apart scenarios, landing forces will potentially need to engage in more land-fighting without large numbers of forces nearby. They will likely rely more upon air support, long-range fires and “networked” intelligence from other ISR nodes, command and control ships or elements of the force—to find and exploit landing areas most advantageous to the attacking force.

The emerging ACVs will launch from big-deck amphibious ships, known as LHAs, and Amphibious Transport Docks, known as LPDs. With one of the upcoming LHA America-class amphibious bringing back the well-deck, the Marine Corps plans to emphasize ship-to-shore water-launched combat vehicles. At the same time, Navy leaders emphasize that the first two America-class amphibious, LHA 6&7, are built with an aviation emphasis to, among other things, capitalize upon the F-35B jets and other key air-launched elements of amphibious attack. These aviation-centric big-deck amphibious vehicles are intended to pave the way toward the upcoming LHA 8, which brings back a well-deck.