The U.S. Bomber Fleet is Shrinking Fast. Can the B-21 Turn It Around? 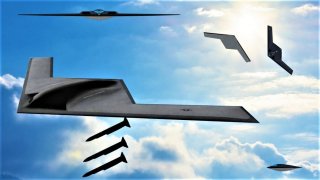 The Air Force might make special new efforts to massively surge-produce new B-21s at an accelerated pace as part of a maneuver to mitigate what service leaders believe is a substantial bomber deficit.

“The risk in the bomber portfolio is high. We’ve got to do better. We’ve got to accelerate the B-21 capability as quickly as we can. But in the short term, the answer is no,” Lt. Gen. S. Clinton Hinote, deputy chief of staff for strategy, integration, and requirements. told members of Congress, as cited in a report from Air Force Magazine. “We can’t get the B-21 fast enough.”

Gen. Arnold Bunch, Commander of Air Force Material Command, is among the service’s senior leaders managing the production and ultimate sustainment of the B-21. He believes the industrial base capacity, and success of the program thus far, are such that the Air Force “could go higher” than 100 B-21s, possibly much higher, according to a report in Air Force Magazine.

“As I look at how we set up the mission system and the open systems architecture for the B-21, we are going to retain those aircraft for a long period of time because I am going to bring new technologies in. For small fleets it is hard to get a vendor base,” Bunch told Ret. Lt. Gen. David Deptula, Dean of the Mitchell Institute for Aerospace Studies, in a  video interview as far back as last year.

The first two B-21s are actually “in production” and slated to arrive in coming years, according to Air Force officials cited in Air Force Magazine.

“Once we get through design and get the first ones delivered, we can adjust production rates and maybe affect them that way, but we have to get through the engineering with solid discipline,” Air Force acting acquisition executive Darlene Costello, told Congress according to the Air Force Magazine report.

The timing of just how fast and steadily new B-21s arrive continues to bear heavily upon current Air Force decisions regarding the pace and scope of B-1 retirement. The process has been an evolving one for the Air Force, which seeks to optimize the size and effectiveness of the bomber fleet in a steady fashion over the next few years until the full scope of just how fast B-21s can arrive is better understood. For example, the Air Force Magazine report suggests that the Air Force may slow the pace of B-1 retirements, citing current service plans to keep 45 B-1 bombers until it has sufficient information about prospects for the pace, scope, and size of the arriving B-21 fleet.

Air Force developers expect the first official B-21 flight, scheduled for sometime next year, will yield crucial results regarding any possible need for adjustments and the prospects for a production acceleration.