The U.S. Military's Bomber Fleet Is Destined to Shink 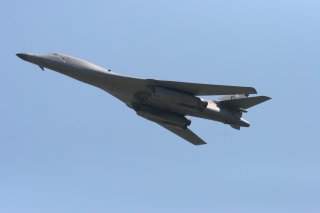 Thanks to upgrades, the long-serving, combat-tested B-1 bomber may yet live well into the future before sunsetting in greater numbers, to address what the Air Force sees as a massive bomber deficit. The B-1s will hopefully fill the gap as the Air Force ramps up production of the new B-21 in coming years.

“We will have 125 total bombers before the B-21 begins to join the force in significant numbers, creating the smallest number of bombers we have had since 1940. I do think we will see periods in the next ten to fifteen years where the force gets smaller before it gets bigger,” Major General Mark E. Weatherington, Commander, Eighth Air Force, and Commander, Joint-Global Strike Operations Center, told The Mitchell Institute for Aerospace Studies in a video interview last year.

The aim is to manage sustainment costs and the relative utility of upgrading and keeping older B-1 planes while ensuring the size of the bomber fleet does not get badly compromised.

While the Air Force has not specified a timetable, the B-1 is not likely to be fully retired until the 2030s or later depending upon the service’s B-21 production capacity. Woven into this equation is the reality that the B-1 has been receiving the largest technical overhaul in its history, an integrated effort that includes new weapons, engines, networking technologies, and avionics.

The engines are being refurbished to retain their original performance specs, and the B-1 is getting new targeting and intelligence systems, Air Force officials told The National Interest a few years ago.

The B-1 has in recent years also been getting a new Integrated Battle Station which includes new aircrew displays and communication links for in-flight data sharing, technology which Air Force weapons developers say includes “machine-to-machine interface for rapid re-tasking or weapons retargeting.”

Another B-1 upgrade called the Fully Integrated Targeting Pod connects the targeting pod control and video feed into B-1 cockpit displays. The B-1 will also be able to increase its carriage capacity of 500-pound class weapons by 60-percent due to Bomb Rack Unit upgrades.

The B-1 bomber, while lesser-known when compared with stealthy B-2 bombers, has been dropping a large percentage of ordnance in recent years