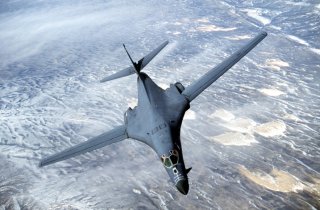 A sad day: In an effort to free up funds for the introduction of newer, more capable stealth bombers, the Air Force is mothballing 17 of their iconic B-1B bombers.

The B-1B Bomber: A Short History

The B-1B Lancer is a product of Cold War calculations, designed to penetrate Soviet air defenses supersonically and below enemy radar. Though not a dedicated stealth bomber, the variable-sweep supersonic bomber has some stealthy features, like radar-deflecting serpentine engine air intakes and radar-absorbent material in its airframe that is said to give it a radar cross-section similar to that of a fighter airplane, much smaller than its actual bomber size.

While the Lancer project was still in the prototype phase, the program was nearly canceled. A Soviet pilot, Viktor Belenko defected to Japan with his MiG-25 interceptor and revealed that newer Soviet jets would have upgraded radar that would allow them to scan the terrain below them, effectively negating what would have been the Lancer’s advantage as a low-flying bomber. However, the Lancer project continued, partly due to a lack of other aircraft with the speed and range the Lancer afforded, necessitated in part by the Soviet invasion of Afghanistan.

Though the much more advanced B-2 Spirit stealth bomber superseded the B-1B in terms of capabilities in contested airspace and against near-peer enemies, the B-1B nevertheless enjoyed a renaissance of sorts during the conflict in Afghanistan, where the platforms were used as a rapid-response close air support platform. Though the B-1B couldn’t fly in as close as purpose-built close air support (CAS) platforms like the A-10 Warthog, increasingly sophisticated precision weaponry and improved cockpit upgrades afforded better situational awareness and helped the platform in the CAS role. As the United States prepares for the B-21 stealth bomber, however, it looks like the B-1B Lancer’s days are capped.

In a recent statement, the Air Force Global Strike Command explained why the B-1B is entering retirement, stating that they’re “beginning to retire legacy bombers, to make way for the B-21 Raider," something that the Air Force has "been working toward for some time.” Put simply, the Lancers are beginning to show their age. “Due to the wear and tear placed on the B-1 fleet over the past two decades, maintaining these bombers would cost 10s of millions of dollars per aircraft to get back to status quo. And that’s just to fix the problems we know about. We’re just accelerating planned retirements.”

Interestingly, four of the 17 Lancers will be kept in Type 2000 storage, a standard that thoroughly preserves them with a type of white lacquer that keeps out dirt, dust, moisture, and wildlife, and protects them from the sun so that the airframes can be cannibalized for spare parts in the future if necessary. So while the Lancer program is in its twilight, there is a glimmer of hope for B-1B flights in the future.