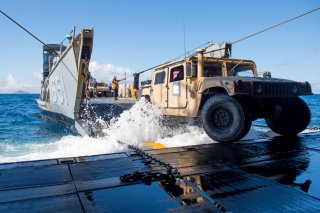 As a part of the Marine Corps’ move away from the grinding land campaigns that defined combat in the Middle East, it is shifting gears to become a more maritime-focused force.

The commandant of the Marine Corps, Gen. David Berger, is driving the change in force structure, aiming to make the Corps highly decentralized and mobile in the water. In order to realize that vision, the Marine Corps will need to work with its sister service, the U.S. Navy, and get a new class of ships into service: the light amphibious warship, or LAW.

The Marine Corps wants the LAW—which will haul groups of seventy-five Marines and equipment throughout the Indo-Pacific region—at a modest price point of $150 million.

“While we await the delivery of [Medium, Landing Ship], which post-dates the planned operational readiness of our MLRs, we will explore a family of systems bridging plan—including, Expeditionary Transfer Dock (ESB), Expeditionary Fast Transport (T-EPF), Landing Craft Utility (LCU), and leased hulls—that can provide a basic level of mobility,” the Corps’ updated document explains.

“Although not optimal, such vessels will provide both operational capability and a sound basis for live experimentation and refining detailed requirements for the LAW program.”

The emphasis on operations in littoral waters is seen by some as a return to the Marine Corps’ amphibious heritage, but it has also sustained significant criticism from active duty and retired Marines.

Optimizing the Corps for a fight in the Indo-Pacific against China could leave America’s force-in-readiness in the lurch should conflict break out elsewhere or against an enemy other than China.

During the Modern Day Marine Conference, the deputy commandant for combat development and integration, Lt. Col. General Karsten Heckl, explained that the Corps is leasing a ship-to-shore landing vessel for the newly-minted 3rd Marine Littoral Regiment to use and experiment with.

“As you know, the LAW is a few years out. So we’re taking [the] opportunity to do some experimentation and refine the prototyping so that we get what we need—what the Marines need,” General Heckl said.

The Marine Corps has the option to lease additional vessels while they wait for the LAW to enter service, a date that has been delayed for several budgetary years but that the Marine Corps anticipates coming in the 2025 fiscal year.