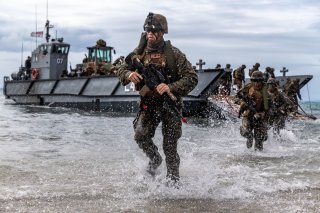 The Marine Corps, America’s force-in-readiness, is in the midst of its most significant change since the collapse of the Soviet Union and the end of the Cold War. The Corps’ guiding document, Force Design 2030, outlines what that change will look like and how the Corps’ force structure will differ from the past.

The Marine Corps recently released an updated version of Force Design 2030, adding more specific details about the Corps’ future. The strength of the Marine Corps is its people—and the Corps is dead set on reducing its numbers.

“Over the past two years, we reduced our end-strength by approximately 7,000 Marines primarily through … divestments.”

“In the next year, we will continue our balanced approach and reduce the number of personnel in the Service headquarters, supporting establishment, and component commands by 15 percent.”

The Marine Corps has more turnover within the ranks than any other service branch, which the Force Design addresses and hopes to reverse.

More specifically, the Marine Corps would like to “achieve greater average time in Service and thickening of the E-4 to E-7 ranks to support a more mature force, while not disadvantaging or disincentivizing the most talented Marines—who must be allowed to move as rapidly as their talents dictate.”

The document adds that “driven by the changes from Force Design, certain communities will require more senior ranks in certain formations. This will allow us to mature the force and meet the aspirations of Force Design.”

Perhaps one of the most controversial aspects of Force Design 2030 has been Commandant Berger’s decision to divest all the Marine Corps’ tank battalions. The Marine Corps partly justifies the divestment decision by citing the Indo-Pacific’s size. However, the logistical footprint of keeping tanks fueled—in a maritime environment—would also be challenging to manage.

However, for what the Marine Corps is losing in armor, it is gaining in sensors.

“One role for Stand-in Forces will be to collect and share sensor data as part of naval and joint networks,” the updated Force Design 2030 explains.

“Our MLRs will possess an organic capability to sense the maritime battlespace in order to gain and maintain custody of targets as a reconnaissance/counter-reconnaissance task and to assure their ability to deliver maritime fires, even when the larger sensor network is degraded or compromised.”