U.S. Navy and Marine Corps Are Integrating In Preparation for Pacific Warfare 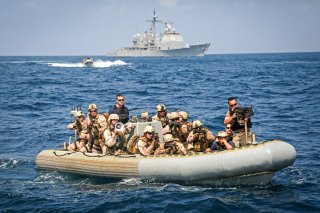 The USNS Burlington, a ship owned by the Navy but piloted by a civilian crew, conducted fleet experimentation in Key West, Florida, alongside the U.S. Navy’s 4th Fleet.

“Test concepts were selected based on operational needs and gaps,” a statement from the U.S. Navy covering the testing event explained.

The USNS Burlington is a Spearhead-class expeditionary fast transport vessel named after the capital of Vermont. Powered by four diesel engines, the ship can achieve 43 knots or about 50 miles per hour.

“Our ability to establish maritime superiority in the littorals is foundational to deterring future conflict. Here, we are bringing together air, expeditionary, and information warfare to achieve that effect.”

U.S. Marines to the Littorals

The United States Marine Corps is undertaking its most significant force redesign in over a generation. Rather than serving as a second army for the kinds of grinding campaigns seen in the Middle East, the Corps is returning to its maritime roots.

To that end, the Marine Corps has concluded that if it doesn’t swim, it will sink—and the service has already divested all tank battalions as well as a significant amount of artillery and tube mortar pieces.

At the same time, the Corps is driving home the importance of decentralized command in far-flung littoral areas. Thanks in part to the proliferation of potent Chinese anti-ship weaponry, the Marine Corps is attempting to disperse smaller groups of forces in an Indo-Pacific combat scenario rather than concentrate Marines on land locations.

The Marine Corps will lean on its sister service, the Navy, to achieve this highly mobile, decentralized maritime structure—and is fielding new ships piloted by U.S. Navy sailors to do so.

“These fleet experiments provide an important opportunity to test new ideas in a controlled environment. They also put technology experts in close contact with fleet operators to increase mutual understanding of operational problems and the state of the art tools that can be leveraged to address them,” explained Rear Admiral Doug Sasse, the reserve vice Ccommander of U.S. 4th Fleet.

“This year’s experiments were expeditionary focused and demonstrated how spectrum dominance can provide great advantage for our forces operating in littoral waters in the U.S. 4th Fleet area of responsibility and around the globe.”