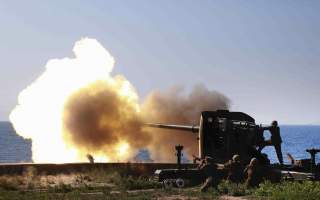 If war broke out in 2018, the death toll from North Korean artillery strikes could be enormous, Brooks warned. “Conservative predictions of a likely attack scenario anticipate an initial artillery barrage focused on military targets, which would result in significant casualties.”

North Korea on Nov. 16, 2018 claimed it tested a new “ultramodern” weapon, ending a voluntary freeze on major weapons testing that began in April 2018.

Pak Jong Chon, who apparently is head of the Korean People’s Army Artillery Command, reportedly attended the test alongside North Korean leader Kim Jong Un, hinting that the weapon in the test was a non-nuclear artillery system, perhaps firing rockets.

“After seeing the power of the tactical weapon, Supreme Leader Kim Jong Un was so excited to say that another great work was done by the defense scientists and munitions industrial workers to increase the defense capability of the country,” KCNA reported, according to The New York Times.

The test underscores the continuing threat that North Korea’s conventional weapons pose to South Korea and U.S. forces on the Korean peninsula, even as the world mostly focuses on Pyongyang’s atomic arsenal.

Much of Pyongyang’s artillery is in range of the Seoul Greater Metropolitan Area, which begins just 25 miles south of the DMZ. Some 10 million people live in the Greater Seoul Metropolitan Area and another 15 million reside just outside of the metropolitan area. South Korea has prepared underground shelters for Seoul’s entire population.

Since the end of the Korean War in 1953, the North Korean army has steadily built up a powerful artillery force along the demilitarized zone separating the two Koreas. The force includes more than 13,000 rocket and tube artillery pieces, Reuters estimated.

“North Korea has deployed at least three artillery systems capable of ranging targets in the [Greater Seoul Metropolitan Area] with virtually no warning,” Brooks warned. The 170-millimeter Koksan gun is the most numerous. It can fire a distance of 37 miles. North Korea also deploys truck-mounted launchers that can fire a volley of as many as 22 240-millimter rocket out to a range of 37 miles.

The South Korean army in March 2018 announced that it would establish a new artillery brigade and equip it with GPS-guided Korea Tactical Surface-to-Surface Missiles for the expressed purpose of destroying hardened artillery positions.

The tit-for-tat artillery and counter-artillery deployments have continued despite North and South Korea briefly discussing, as recently as June 2018, a partial pull-back of artillery forces. As of mid-November 2018, nothing had come of the discussions.

If war broke out in 2018, the death toll from North Korean artillery strikes could be enormous, Brooks warned. “Conservative predictions of a likely attack scenario anticipate an initial artillery barrage focused on military targets, which would result in significant casualties.”

“A larger attack targeting civilians would yield several thousand casualties with the potential to affect millions of South Korean citizens,” Brooks continued, “not to mention hundreds of thousands of U.S. citizens and nationals of other countries within the first 24 hours.”