Forget the AR-15: The Kel-Tec Rdb Semi-Automatic Rifle Is Better 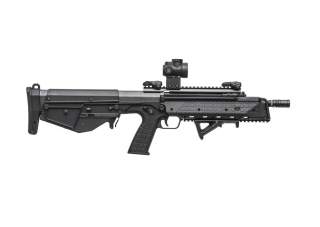 Key point: Kel-Tec's RDB is a perfect gun for people who are left-handed. Moreover, the RDB has several features that the AR-15 does not.

The AR-15 series of weapons reign supreme as the dominant semi-automatic rifle platform in America. Despite this, there are a number of useful alternatives that a gun owner could use to break out of the pack and carry something different and unique. The Kel-Tec RDB, one of the few bullpup rifles on the market, has all the standard features of an AR-15 and then some.

One of the obvious features of the RDB rifle over its contemporaries is the bullpup layout. Bullpup military-style rifles become popular in the 1980s, as several Western countries adopted them in the shift from 7.62 to 5.56-millimeter rifles. The British Army traded in its standard configuration L1A1 7.62-millimeter battle rifles for the new SA80 5.56-millimeter assault rifle, while both Austria and Australia similarly moved on from a 7.62 rifle to the 5.56 caliber Steyr AUG.

The bullpup configuration is generally acknowledged as one that places the rifle’s moving parts, including piston, chamber, bolt, and magazine well behind the trigger. These parts are so far to the rear they are typically in the buttstock, greatly shortening the overall length of the rifle. As a result, the British SA80 has a barrel 20.4 inches long while the rifle itself is just 30.5 inches. That’s approximately six inches longer than the barrel of the U.S. Military’s M4A1 carbine. The extra length allows gas pressure from the burning gunpowder to act longer on the bullet, giving it greater velocity and therefore slightly longer range.  The M16 series weapon with a 20-inch barrel, the M16A2, is 39 inches long.

The result is a weapon that is both handier and more compact--particularly useful in urban combat situations where narrow hallways and doorways may restrict how readily a soldier can point his weapon. At the same time, the longer barrel length and range allows for longer range engagements in open, rolling country.

The RDB also differs from the AR-15 rifles internally. Unlike the latter, which use the direct impingement gas system, the RDB uses a piston system to drive the bolt and cycle the weapon. The result is a cleaner chamber in the RDB and a cooler running weapon less prone to overheating. The RDB also takes magazines manufactured in accordance with NATO standardization agreements. As a result, it can take any standard 20 and 30 round 5.56 ammunition magazine used by NATO member armies, including both steel and plastic magazines.

Other features make the Kel-Tec rifle stand out. The 17.3 inch barrel features a 1 in 7-inch barrel rifling twist, identical to most AR-15s. This rifling stabilizes the bullet in flight, particularly standard and slightly heavier 5.56-millimeter bullets. Kel-Tec describes it as designed for M193-type ammunition, or 55 grain bullets, but it would also do well with heavier 62 or 77 grain bullets. The gas system can also be adjusted to retain more or less gas, and can be adjusted by hand or with a shell casing if the weapon is hot.

The extensive use of polymers and aluminum reduce overall weight to just 6.7 pounds, making it competitive with the AR-15. The RDB features a monolithic Picatinny rail running along the top of the weapon, as well as a similar rail forward of the trigger well. This allows the weapon to be equipped with different types of optics and aiming devices, from magnified rifle scopes to red dot sights, lights, lasers, and bipods.

Unique among bullpup rifles, the RBD is fully ambidextrous. The safety and bolt stop appear on both left and right sides of the weapon. The charging handle, which loads the weapon, is by default located on the left side but can easily be switched to the right side for left-handed shooters.

By far the greatest ambidextrous improvement, however, is the ejection port. Early bullpup weapons such as the SA80 fixed the ejection port on the right-hand side. Given that the port was far to the rear, a left-handed shooter would get a face full of brass when firing and had to be trained against his or her instincts to shoot right-handed. The RDB solves this problem by ejecting brass in a neutral direction--downward--where it doesn’t affect left or right-handed shooters.

In the world of semi-automatic rifles, the AR-15 dominates but is not dominant in features. The Kel-Tec RDB is a worthy alternative to the AR platform, especially for left-handers and those who just want something different. While the bullpup pattern may not be for everyone, the Kel-Tec remains one of the best thought-out of the type on today’s market.