Forget the Coronavirus: The Flu Pandemic of 1918 Killed More People in One Year than all of World War I 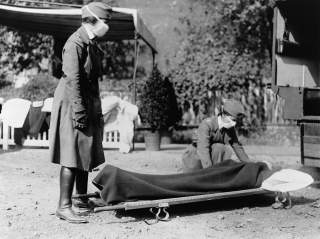 Up until World War I, the ravages of disease in wartime regularly claimed far more lives than bullets, bayonets and cavalry sabers. Many histories readily remember the two hundred thousand soldiers that died in battle in the American Civil War at places likes Cold Harbor and Little Roundtop, and less the four hundred thousand felled by diarrhea/dysentery, pneumonia, typhoid and other diseases.

But water-cooled machineguns, magazine-loading rifles and artillery that could rain death accurately and at a high tempo from miles away all combined in World War I to change that grim equation. Three-quarters of the roughly ten million soldiers killed in the war fell to man-made, mass-produced death machines rather than nature’s natural born killers.

Yet nature, in the end, would get the last laugh. As the Great War ground to a close in 1918, an influenza pandemic broke out killed between fifty and one hundred million people. (Those deaths are generally excluded from other disease-related deaths in World War I.) That means more people in one year died from the flu than in four years of non-stop fighting on World War I battlefields.

The “Spanish flu” as it became known probably wasn’t really Spanish. That just happened to be the one major country that didn’t actively censor news of the pandemic, such as the infection of King Alfonso XIII, because it was not at war.

That said, there’s no consensus as to where the true Ground Zero really lay. One analysis argues the outbreak began amongst U.S. soldiers at Camp Funston in in Haskell County, Kansas in March 1918.

A competing theory claims the flu strain originated in China and was passed on amongst the tens of thousands of laborers sent to assist France in the Great War. In turn European studies claim the virus caught hold in 1917 in a hospital in France or in Austria.

Regardless of origin, one of the factors that made the influenza so deadly is that it turned the body’s natural defenses against it, unleashing an effect ominously called a “cytokine storm.” The white blood cells that are supposed to protect the body from disease become over-stimulated, producing an excessive amount of cytokines (a class of proteins intended to signal immune and endocrine responses). The cascading cytokines in turn triggered an often fatal inflammatory response leading to pancreatitis, fluid in the lunges, hemorrhaging and organ failure.

As a result, the pandemic’s highest fatality rate occurred amongst relatively young adults aged twenty to forty with strong immune systems, while comparatively sparing the lives of the very old and young.

Later in the illness, though, secondary pneumonia infection led to even more fatalities.

Ultimately, scientists believe the 1918’s flu’s unusual deadliness was primarily due to wartime circumstances that enabled rapid proliferation, namely tens of millions of soldiers in close proximity, traveling around the globe and living in crowded, unhygienic circumstances.

Medical authorities could do little to directly combat the disease: there simply weren’t vaccines to combat H1N1, nor penicillin to control the often fatal secondary bacterial infections. Prescription of aspirin may even have backfired. All they could do was implement measures to discourage transmission, including quarantining the infected, discouraging public gatherings, and promoting better hygiene.

In August, a much deadlier second wave of infections rippled across the globe in August from epicenters in France, Sierra Leone and the United States, with ten times the death rates of the initial outbreak. It was the same flu, though, as those infected in the first wave had become immune.

Such care facilities as existed were utterly swamped by the influx, as were burial grounds. India lost 5 percent of its population. Strict maritime quarantines had a few local successes but did not prevent the spread of the virus to numerous Pacific Islands, where tight-knit local communities sometimes lost up to 20 percent of their population..

This second outbreak dissipated by October, only to come back a final time in January 1919 following the crowded Armistice Day celebrations and the flow of soldiers returning home.

By the pandemic’s end, around five hundred million people—more than one out of every four human beings (27 percent) on the planet had been infected by disease. Of the infected, between 10 and 20 percent died from the disease, resulting in the death of between 3 and 6 percent of the 1.8 billion humans then inhabiting the Earth.

Nonetheless, the pandemic is usually presented as a footnote to the history of the Great War, despite the fact it claimed many times more lives, distributed more broadly across the global population. Though some of that can be attributed to censorship suppressing reporting on the outbreak, one is nonetheless left with an insight into how humans are likely to treat similar outcomes very differently according to their cause.

World War I irrevocably tortured the very landscape on which it was fought and caused revolutionary changes in the social and political order across the globe. It left behind millions of veterans burdened with psychological trauma from battle, which in turn had tremendous downstream effects on art, literature, cinema and political philosophy. As a result, there are thousands of articles written by writers like me on World War I battles and their consequences for every piece on the influenza epidemic.

By contrast, perhaps the fact that the pandemic killed its victims so rapidly limited the degree of trauma on a society as a whole. Instead of leaving behind a material and psychic devastation, the invisible killer left behind the quiet absence of lives that could have been.

But that, arguably, reveals how often we overestimate disruptive but rare threats to life and limb like airline crashes, serial killers and terrorist attacks, at the expense of deadlier but more mundane killers.

For example, as recently as the winter of 2017–18, the Center for Disease Control counted eighty thousand flu deaths—more than all the U.S. combat deaths from war in the last fifty years combined.