Forget Hurricane Dorian: Meet the 5 Worst Hurricanes to Ever Hit the U.S. 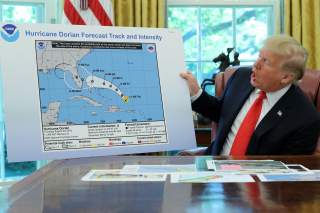 Having left large swathes of the Northern Bahamas in ruins over the past 24 hours, Hurricane Dorian has lumbered northward to America’s doorstep.

Dorian, which is currently roiling Florida’s east coast on its path to Georgia, the Carolinas, and Virginia, is projected to cadorian use millions of dollars’ worth of damage while dislocating the lives of thousands of evacuees.

But grim as these projections are, they pale in comparison to the damage wrought by scores of prior hurricanes in American history.

Here are five of the most destructive.

In 1900, the coastal city of Galveston, Texas, was ravaged by what would come to be known as America’s deadliest natural disaster.

The Great Storm of 1900, or simply the Galveston hurricane, claimed as many as 8,000-12,000 lives--a death toll so staggering that it matches or exceeds the next 10 most fatal American hurricanes combined. Though rebuilt in the years following the disaster, Galveston is a faint echo of what was once a thriving port hub that was said to be second in economic activity only to the port of New York City. If such a devastating loss of human life is to have any silver lining, it is that the Galveston Hurricane spurred an early American interest in hurricane prediction and safety measures.

As Dorian makes its way through Florida, it bears remembering that the Sunshine State is no stranger to intermittent hurricanes of varying intensity.

Few, however, have come close to the body count of the Lake Okeechobee Hurricane of 1928. The storm made landfall at Point-a-Pitre, Guadeloupe, causing 1,200 fatalities before moving northwest. The greatest loss of life was around Lake Okeechobee, in South Florida; a storm surge led to the collapse of a makeshift dike, flooding the lake’s southern shore to cause the drowning of over 2,500 Florida residents.

The costliest and arguably most notorious storm in modern American history, Katrina made landfall in South Florida as a category 1 hurricane. It then quickly amassed speed all the way to category 5, before coming back down to category 3 as it entered Louisiana and Mississippi. In the Greater New Orleans region, a region-wide storm surge-- and what has since been revealed to be shoddy engineering and reckless cost-cutting-- led to a systemic failure in Katrina’s levee system. 80% of the city was flooded, leading to just under 2,000 fatalities and severe structural damage estimated at a staggering $161 billion.

Second only to Katrina in cost at $125 billion and occupying the dubious distinction of wettest tropical cyclone in US history, Harvey carved a destructive swathe through southeast Texas and the Houston area. Unprecedented levels of rainfall led to several levee breaches, mass outages, and damage to just under 50,000 homes.

While not as innately destructive as several of the other hurricanes on this lest, Hurricane Sandy’s trajectory through New York City all but assured its outsized impact. New York Governor Andrew Cuomo called in the National Guard as the city was placed on lockdown amid widespread power outages; the New York Stock Exchange and NASDAQ were both closed for two days, while hundreds of thousands of homes and residences in the densely populated, highly urbanized New York area were either destroyed or damaged beyond repair. Sandy’s total cost was estimated at around $68 billion, making it one of the costliest hurricanes in US history--New York lost the lion’s share of $42 billion.

Typhoon Lingling Is Coming: Remember the 5 Deadliest Typhoons of All Time