Forget the S-500 or Su-57 PAK-FA. Russia's Military Has Big Plans for the Future. 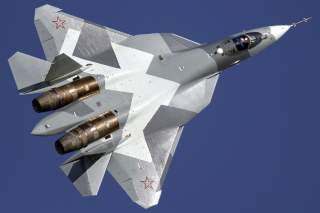 Russia has started planning for the development of a series of next-generation weapons to follow-on to systems such as the Sukhoi Su-57 PAK-FA and the S-500 surface-to-air missile (SAM) battery. These new systems—which the Russian government has not named—will be developed under future advanced State Armament Program.

“An important and key issue on our agenda is to define the beginning of the creation of yet another advanced state armament program,” Russian President Vladimir Putin said during a meeting of the Kremlin’s Military Industrial Commission.

Putin said that Russia has to start planning for its future defense needs now as it completes developmental programs that were funded under the current State Armament Plan (GPV-2027). “It is important for us to move further and start planning today the future development and production of advanced weapons and equipment that will define the image of the Russian Armed Forces in the long-term, for the next few decades,” Putin said.

The Russians are continuing to refine a new pricing model, which was introduced in December 2017, that the Kremlin hopes will reduce costs and improve defense industrial performance. “It allows the defense industry to lower expenses and introduce modern production and management technology, thus improving the performance of the industry and enhancing its investment appeal and its capabilities to produce competitive high-tech civilian products,” Putin said. “We need to continue streamlining the pricing system, to use the latest information and digital technology to more comprehensively analyze the process of military hardware pricing and to quickly identify problems.”

“The effectiveness of the defense industry directly depends on the abilities of the personnel,” Putin said. “Much attention has been paid to this issue in the past few years. As a result, the number of specialists in the industry has stabilized and even increased in some organizations. Importantly, the defense industry is creating the conditions for the inflow and long-term work of talented young people that are capable of meeting the most ambitious challenges and ensuring continuity in schools of sciences.”

Putin also noted what the Russians believe to be their successes in their current slate of developmental program, 21 of which were approved in 2015. “As a result of this program, our forces should receive new hardware, cutting-edge arms with better combat characteristics than their foreign counterparts,” Putin said. “These include the Sarmat missile system, the Su-57 fifth generation fighter, a reinforced tank based on the Armata combat platform, the S-500 air defense system, and the Project 677 submarine.”

Time will tell how successful the Russian defense industry’s future programs will be.