Forget South Carolina: The 2024 Republican Presidential Primary Will Be Insane 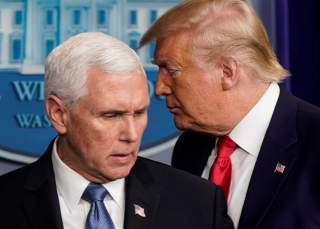 All eyes may be focused on the Democratic primary in South Carolina tonight and the Super Tuesday grudge-match next Tuesday, but there is another contest going on beneath the surface. And it concerns an election that is still four years away.

The Democratic Party primary began with one of the largest fields on record, with at least a dozen serious contenders tossing their hats into the ring to vie for the nomination. The Republican Party could very well experience a similar situation in 2024, when the scions of Donald Trump’s “America First” agenda will be engaging in head-to-head combat for a wider Republican audience for the very first time.

By the time the next GOP presidential primary kicks into high gear in the spring and summer of 2023, we could see three different Trump administration cabinet officials in the race, not to mention several lawmakers who consider themselves high-profile Trump surrogates. Former Ambassador Nikki Haley, Vice President Mike Pence, Secretary of State Mike Pompeo, Arkansas Sen . Tom Cotton, Missouri Sen. Josh Hawley, and Florida Gov. Ron DeSantis are all prospective candidates for the 2024 primary dogfight—and each one of them will be competing for the coveted endorsement of Donald Trump. Of those three, Haley, Pence, and Pompeo will likely get top billing by virtue of their service to the administration and their personal interactions with the president.

Haley didn’t take long to catapult herself back into the national spotlight. Two months after resigning as the U.S. Ambassador to the United Nations, she formed a policy group called “Stand for America,” wrote a memoir, and jetted from TV studio to TV studio to promote her book and keep her name in the conversation. The former governor of South Carolina and Trump cabinet official is a darling in Republican circles and continues to be a hot item for GOP fundraisers across the country. Haley raised money this month in Nashville, Tennessee for Bill Hagerty, the GOP favorite in this fall’s race to succeed retiring Sen. Lamar Alexander. She was a headliner in last fall’s Trump-Pence 2020 fundraiser and has committed herself to serving as a top fundraiser for the National Republican Congressional Committee. It is these kinds of speaking engagements that not only provide the former ambassador with a platform to improve her skills as a moneymaker, but also an opportunity to establish relationships with some of the very donors, voters, and stakeholders that will be useful in any prospective presidential run.

Mike Pence is also barnstorming the country on behalf of the administration’s agenda and Trump’s re-election. As one would expect, the loyal vice president is trying to do his best to tie himself directly to Trump, whose approval ratings among Republicans was 93% this month. Pence is not exactly a boisterous, cocky, exciting politician on the stump like his boss—in fact, Trump and Pence couldn’t be more different in terms of style. But for the former governor of Indiana and Republican congressman, style is not nearly as important as headlining for Trump during the big rallies, frolicking through towns in the Midwest under the Trumpian banner, and refining his talents as a retail politician. In the event Pence does decide to run for president in 2024—a certainty if there ever was one—you can bet that he will exploit his perch as Trump’s stalwart veep to demonstrate to Republican voters that he, not anyone else, is the best thing for Trump’s movement short of Donald Trump himself.

Then there is Mike Pompeo, who never misses an opportunity to heap praise on Trump wherever he is at any given time. Pompeo is one of those rare cabinet officials who managed to stay in Trump’s good-graces. The former congressman, CIA director and current secretary of state has pulled it off by deploying Trumpian tactics in public, being extremely combative with Democrats on Capitol Hill as if they were enemies of the American Republic, making fun of John Kerry for negotiating horrible deals, and blaming Barack Obama for everything wrong with America.  Pompeo’s counsel on foreign policy may be wildly off the mark and riddled with failure, causing more problems for the United States than it solves. But that hasn't impacted his reputation in the administration or his relationship with Trump personally; indeed, Trump often compliments Pompeo in public for his work. Never straying from the president’s public remarks and denigrating yourself as a yes-man may have its privileges by the time Pompeo returns to politics (which, of course, he never really left).

The 2024 GOP primary has the potential to make this year’s Democratic nomination fight look like softball.