Forget the Stealth F-22 or J-20: China Has Some Serious Plans for a 6th Generation Fighter 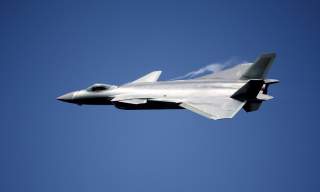 With China’s flagship fifth-generation fighter fresh off the production line, is Beijing already looking beyond the J-20?

The Global Times draws this conclusion from an interview that Wang Haifeng, chief architect at Chengdu Aircraft Research and Design Institute, gave to another Chinese publication. Technical details on China’s upcoming sixth-generation fighter are scant and, this early in its production cycle, likely unreliable.

There is, however, an increasingly well-defined list of basic sixth-generation features that the Global Times expects to see in the jet’s design. First, the ability to command auxiliary drones that are closely integrated with the fighter’s onboard control systems. These can fill both support and attack roles, and -- as in the case of the Su-57’s recently leaked Okhotnik (“Hunter”) attack drones--  can apparently execute air-to-air operations.

Secondly, sixth-generation control systems are expected to offer a whole new level of artificial intelligence integration; immediate benefits include simplified fighter management and real-time analytics for faster targeting, though aerospace manufacturers are only at the cusp of finding ways to harness the power of AI.

Finally, and most unsurprisingly, sixth-generation fighters are expected to boast across-the-board performance improvements in the traditional areas of maneuverability, handling, range, and weapons delivery systems.

Why is Beijing rushing into a sixth-generation project when the dust has barely settled on their current flagship?

After all, only a small batch of J-20’s have been serially produced and even fewer have been accepted into combat deployment. The Global Times, citing a Beijing-based military expert, notes that this is actually standard Chinese military-industrial practice: "China's tradition is to have one generation in service, a new one in development and a next-generation under study. Now that the J-20 is already in service, the development for a new aircraft is also underway," the expert said. At least according to this production doctrine, the PLAAF is already researching a seventh-generation fighter.

This three-tiered production cycle is made possible by Beijing’s formidable defense budget that is only slated to balloon into the mid 2020’s. Even so, these are massive long-term outlays; unexpected contractions in China’s economic growth can at least complicate, if not potentially jeopardize these plans.

While the Chinese military establishment is already moving on to the next project and apparently even the one after that, their current J-20’s have yet to be upgraded to the WS-15 engine that they were originally designed with. Currently deployed J-20’s are using older, inferior WS-10B’s as a stopgap solution while Beijing works to resolve the severe quality control issues that are preventing the WS-15 from being mass-manufactured. The problem has to do with the engine’s single-crystal turbine blades, and is so complex that it hindered the WS-15’s mass production for years.