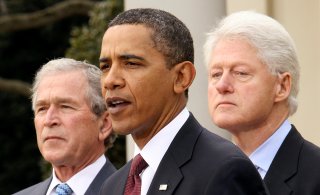 Former Presidents Barack Obama, George W. Bush, and Bill Clinton have said that they are willing to get a coronavirus vaccine publicly to prove that it is both safe and effective.

The announcement comes as only 60 percent of Americans say they would definitely or probably get a coronavirus vaccine, according to a new survey from the Pew Research Center. A recent Gallup poll revealed similar results, with only 58 percent of surveyed adults saying that they would roll up their sleeves for a shot once a vaccine is approved.

“I promise you that when it’s been made for people who are less at risk, I will be taking it,” Obama said on an episode of SiriusXM’s The Joe Madison Show.

“I may end up taking it on TV or having it filmed, just so that people know that I trust this science. What I don’t trust is getting COVID.”

Bush aide Freddy Ford told NBC News that the former president has his sights set on building public confidence in a vaccine.

“First, the vaccines need to be deemed safe and administered to the priority populations,” Ford said. “Then, President Bush will get in line for his, and will gladly do so on camera.”

A spokesperson for Clinton said in a statement that the former president “will definitely take a vaccine as soon as available to him, based on the priorities determined by public health officials. And he will do it in a public setting if it will help urge all Americans to do the same.”

President-elect Joe Biden also jumped on board by saying that he would get inoculated publicly when it’s available to encourage all Americans to get vaccinated.

“When Dr. (Anthony) Fauci says we have a vaccine that is safe, that’s the moment in which I will stand before the public,” Biden said during an interview on CNN Thursday night.

“People have lost faith in the ability of the vaccine to work. It matters what a president and vice president do. I think my three predecessors have set the model on what should be done.”

With Moderna and Pfizer both requesting emergency use authorization for their respective vaccines last month, states are scrambling to prepare to distribute the vaccine in as few as two weeks.

The reviews by the Food and Drug Administration are expected to take several weeks—although the agency has scheduled a meeting for December 10 to discuss Pfizer’s request specifically.

On Tuesday, health-care personnel and residents of long-term care facilities were tabbed by the Advisory Committee on Immunization Practices—an outside group of medical experts that advise the U.S. Centers for Disease Control and Prevention—as the first groups that would have access to a coronavirus vaccine.

Children and young adults are expected to get the vaccine last.